STRIKE ONE WITH VOA

The foundation of this country is structured with pure Fraud and “We The People’ are slaves in the most corrupt fashion that will only continue to destroy human lives. People are the ones who suffer because of greed and abuse. Here in America is where we serve one class of people, the Elites (who run corporations), which consists of many, politicians, corporate owners, property owners, land developers, you get the picture. Small business are not apart of this class only because they can easily be crushed by larger corporations who never pay taxes and control most services such as Walmart and Amazon.

Let’s not forget organizations such as church’s, non-profits and all human and health services like “Volunteers of America”, “Path Ways of Hope”, organizations such as these collect millions of dollars that go into the pockets of the Elites and those at the Top of the Food chain. Pay a small group of employees such as Randi Burton (Cbest) and her supervisor Miata Day and very little goes to those people are supposed to get help.  These bitches are employed by CBEST, who refused me services and lied to me as well.

Let me discuss my 1st) experience with Volunteers of America I was actually in college during this time when I experienced being without a place to live. When your in college you can either pay to live in someones house or the dorms and both will cost you a great deal of money. Regardless I was hopping around from winter shelter to winter shelter and found myself in the worst part of Down Town Los Angeles.  I was told to wait for a bus that took a group of people and myself far away from the area. We were not told were we going or what city we were in. It was obvious to me, it was at least an hour away. The building was run down and condemned, inside it had cots for us to sleep on, there no doors or windows. Next door there were older homes and duplex’s in a run down neighborhood, which gave “ghetto” a whole new meaning.

The people working inside were Volunteers of America employees, this was not the first time I’ve heard of this organization built on Fraud, but it was unforgettable experience being subjected to mental and verbal abuse. The employees were young and the security girl had a big mouth she couldn’t have been older than maybe 25. She was calling me a bitch the entire time when I approached the young black girl as I wanted to know where I was?  As if it was some big secret to keep us hidden and imprisoned in this old condemned building.  Later we were forced to take showers having to walk outside nearly three blocks away from the building to a old rat infest shit hole. I couldn’t tell if it used to be apartments or what? The walls were rotted and their was feces everywhere. Water was leaking from broken plumbing and I ran the fuck out of there, as I was not going to shower in that shit!

The minute I got back to my cot I was to sleep in, this is where the harassment started with this black employee (VOA usually hires black people). She was verbally abusive when I explained my position, she thought  she could have the authority to boss me but didn’t expect me to report her with a phone call.  After that phone call to her supervisor is when she changed her attitude fast. I still was never told where I was, no one would answer this question? The following morning I was taken back and I got the fuck out of that area, quickly and headed for Hollywood.

Now fast forward years later as I continued my journey of being without a place to live (other than motel heaven) at this time I graduated from Northridge (women studies) which you won’t land a great job from, who knew.  My significant other and I had left the West side of Los Angeles and came towards Orange County.  It was suggested to us to go to VOA in El monte and they would help with resources. Nope that never happened, it was a fat joke. I was encountered with Christine Edwards a black woman who did not provide any information of what the organization does.  She knew my man had medical problems and she ignorantly bothered me with back n forth bullshit that went nowhere, emails and documents, never explaining anything.

Later down the road a year later my man receives a voucher for an apartment and Yuliana Hernandez from the whacked out place, East San Gabriel Mental Health starts harassing us how we already signed documents for housing with Christine Edwards. This bitch thought she could pull a fast one in preventing Todd from having his housing. I ripped into her and demanded she show me the documents signed, because I knew this cunt was lying.  Of course she couldn’t because there were no documents.

“Let me share a dirty secret about this fucked up mental health shit, they don’t want to give vouchers for housing, they rather shove people in a shelter”.  Yuliana says, to me “oh it looks like a nice place”, I said oh yeah, well then pack your shit and move from mommy and daddy’s house and go live there bitch, quit your fucken job.  Come back a year later and tell me of your experience, okay?  That little shit just looked at me with stupid look on her face.  These stupid bitches don’t know shit, their too young (and occupied getting pregnant) to know anything, but I do pray their lives turn to shit as they get older and get a whiff of reality! 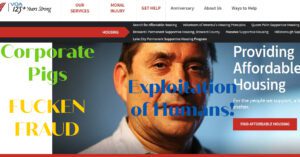 Don’t you just love it when all of all these so-called non profit organizations are made up to funnel money in the wrong bank accounts and help less than 10% of the population, but their world wide:(  That is Volunteers of America. Strike Three you need to do a life time in PRISON,  TWO MONTHS later I went to speak to a Johnny Camacho who is employed with Volunteers of America, in El monte another location.  This place has numerous useless people working here, do nothing, just standing around gossiping as I noticed when I walked in the door. He opened a case for me but never did a fucken thing to assist me with services.  I was later black balled by Randi Burton who lied to me.  I was supposed to speak with Social Security Office and Randi refused to be there, so decided to lie to say I am filing on my own. When I confronted this cunt, she denied everything and lied again. Both Randi and her boss are lying cunts who black balled me, now I am once again with out a place for the third time, after my man died. Volunteers of America is fucken fraud, a non profit organization who has millions of dollars refuses to help me in anyway, once again. Go FUCK YOURSELF!!!!

Taking a long vacation through the black tunnels in the void and meeting Lucifer on my way in would have been less painful, then dealing with these mother fuckers with their lies and betrayal and back n forth bullshit and abuse!!! Go Fuck Yourselves, I so pray all of you suffer in severe pain, end up either dead or homeless and no job!!!