There are so many areas wrong with this entire system, where I begin? Didn’t Biden recently declare a bullshit holiday? “Juneteenth National Independence Day Act. This is Incredibly STUPID! Why? Slavery still exists, it always has and it always will. It’s just presented differently. Modern Slavery is the new Fad!!!  Yet Corporations still rule the world and THEIR GREED IS EXCESSIVE! I still have to work, so how is this bogus holiday exempting anything?

It’s not, it’s celebrating SLAVERY, so the rest can never take a vacation, can never enjoy our retirement and  in the end, were dead by time we turn 70 years old. After having to work two jobs MOST OF MY FUCKEN LIFE and have our home taken away because of FRAUD with the IRS as we all know TAXATION is the biggest SCAM of all time!!! Hey I am living large, so why should I get Unemployment I only paid in to this TAX SHIT! I enjoy getting fucked!

Let’s see the corruption in politics has risen just like the pay scale for the elites, when taking from taxes and social security benefits. Yet if I need my disability or Unemployment or anyone else, we get fucked, plain and simple. For all those bitches and men who sit on their ass at the EDD Office, not doing their job but cashing a pay check, you are just as guilty as the pigs at the top!! Just the other day I tried to file a claim for the Pandemic Edd. As the regular claim I had, denied me just because they can, EDD  refused to give my unemployment money I PAID INTO THIS FRAUD SYSTEM WE THE PEOPLE LIVE UNDER!!!!

Of course they did this to thousands of people. Lets start from here. I emailed this bogus website, and Nate (who finally chose to answer the phone) claims he and the office over see the Edd, of course that is a FAT LIE since I questioned him ? He decided to change his story to “Oh I don’t specifically”, of course you don’t but you should still know the answer to my question if you work in this office?  And you don’t so that means your a lying sack of shit! 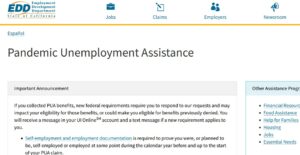 My question was, Is this program of Pandemic Edd still in effect that I may file a claim? Nate couldn’t or wouldn’t answer me! His bullshit to me was email me and I will forward it to the right person, sure you will Nate. I like waiting on people. Why, not?

It’s been now five months since my man died and no knows how the fuck I feel, I filed a claim for disability which my doctor gave a letter to and signed off they refused to acknowledge me and then denied me altogether,  I went to the Unemployment office which was a big fat joke, and all the fat bitches who sit on their ass lie to your face, telling me we will call and assist you, they never did. Edd is Fraud, is a Scam and Corrupt!!!! So after numerous calls of trying to get through the phone lines I experienced , cunts hanging up on me, the phone circulating and never being answered. The phones system is rigged the auto service is going in circles. It’s done with intent, so people get frustrated and will give up!

Another bitch told me because she had my old telephone number, she wouldn’t help me at all and hung up on me. I went through all of this bullshit which took over a month and finally some young woman helped me push my claim through and did it over the phone. See they can do a lot they choose not to. Another rep told me if I call around 2pm pst I should be able to reach someone, so that told me the entire system is rigged including the phone lines, to make it extremely difficult getting through.  Edd Unemployment sounds like this Fraud Company Nexo!

The last straw I mailed all my paper work back waiting for my check, and was back balled because I admitted to being sick a few days , so they used that as the excuse to fuck me over and not give me my money!!! 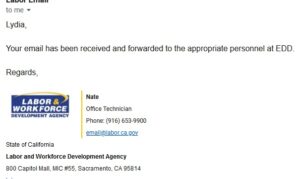 There were numerous ass-wads working this office. When I did get someone on the line the few times I did. I experienced stupid ass people telling me they can’t help with the claim because they work in a different dept. Fucken STUPID EXCUSE!!! Far to many lies being told and the State of California is black balling as many people as possible.  So now that my initial EDD Claim was denied I am contacting the people to assist with this Pandemic Claim and again I am dealing with lies and now this Nate person is another one. Another liar who sits on his ass and does nothing, It’s time for Rip Off Report!!!!