Trump is a Liar, Child Molester, and Con artist, and this is what Americans consider to be a President? Americans are fucking stupid to vote for this Racist Scumbag.. This country doesn’t need scum as a president. We don’t need a president at all!  The people can run the country for themselves. The only reason all this bullshit is structured the that it is, is so white trash like Trump can commit Fraud, Sex Trafficking  and War and label it as “ALL APART OF THE BUSINESS”.

This piece of shit is NO MAN, HE IS A CHILD MURDER AND THIEF. A Times investigation found that he received at least $413 million in today’s dollars from his father’s real estate empire, much of it through TAX EVASION in the 1990s.

Trump participated in dubious tax schemes during the 1990s. First this includes outright fraud, that greatly increased the fortune he received from his parents. So basically this scumbag never worked, but he does collect WHORES as a HOBBIE!!!

A THIEF BORN EVERY MINUTE NEVER WORKED A DAY IN HIS LIFE
He and his siblings set up a sham corporation to disguise millions of dollars in gifts from their parents, records and interviews show. Records indicate that Mr. Trump helped his father take improper tax deductions worth millions more. He also helped formulate a strategy to undervalue his parents’ real estate holdings by hundreds of millions of dollars on tax returns. Basically he was stealing, sounds similar to Jim Lippman another douche bag who lives in Brent-wood.

These maneuvers met with little resistance from the Internal Revenue Service, (Of course they did, IRS only fucks over the POOR). The Times found. The president’s parents, Fred and Mary Trump, transferred well over $1 billion in wealth to their children. Secondly this could have produced a tax bill of at least $550 million under the 55 percent tax rate then imposed on gifts and inheritances. Nothing but FUCKEN GREED!!! WHITE PEOPLE ARE FUCKEN THIEVES AND LIARS!!! 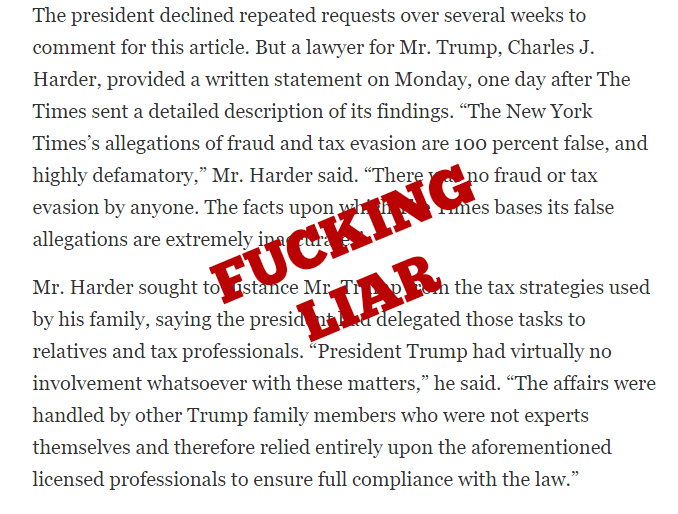 TRUMP KNEW HOW A RIGGED SYSTEM WORKS TO BENEFIT HIMSELF
Much of his giving was structured to sidestep gift and inheritance taxes using methods tax experts described. The Times as improper or possibly illegal. Although Fred Trump became wealthy with help from federal housing subsidies, he insisted that it was manifestly unfair for the government to tax his fortune as it passed to his children. When he was in his 80s and beginning to slide into dementia, evading gift and estate taxes became a family affair, with Donald Trump playing a crucial role, interviews and newly obtained documents show.

The line between legal tax avoidance and illegal tax evasion is often murky, and it is constantly being stretched by inventive tax lawyers. There is no shortage of clever tax avoidance tricks that have been blessed by either the courts or the I.R.S. itself. The richest Americans almost never pay anything close to full freight. But tax experts briefed on The Times’s findings said the Trumps appeared to have done more than exploit legal loopholes. They said the conduct described here represented a pattern of deception and obfuscation. Particularly about the value of Fred Trump’s real estate, that repeatedly prevented the I.R.S. from taxing large transfers of wealth to his children.

“The theme I see here through all of this is valuations: They play around with valuations in extreme ways,” said Lee-Ford Tritt, a University of Florida law professor and a leading expert in gift and estate tax law. “There are dramatic fluctuations depending on their purpose.”

I won’t bother with the rest of this bullshit article. The link is attached if you choose to read it. Trump is a piece of shit who never worked a day (OR PAID TAXES) in his life. He is white trash, a bigot and a rapist. So many other things I don’t have all day to label him, but we will move on to the next issue of him being a child molester and murder.

Since the late 1980s, DOUCHEBAG Donald Trump is a liar with his good friend who is NOT a financier JeffreyEpstein. Both have run in the same circles. I believe Jeff Epstein was the FRONT MAN for the sex TRAFFICKING OF WHO WAS REALLY BEHIND IT ALL. The media lies way to much to protect all the scum at the top. Jeff Epstein was NOT RICH, it was the tax payers money who the elites steal from. Using all that money to support their personal sadistic and INSIDIOUS BEHAVIOR of Sex Trafficking.  Epstein was murdered so he wouldn’t be able to roll on anyone. The front man always takes the fall, its that simple and then he is disposed off. 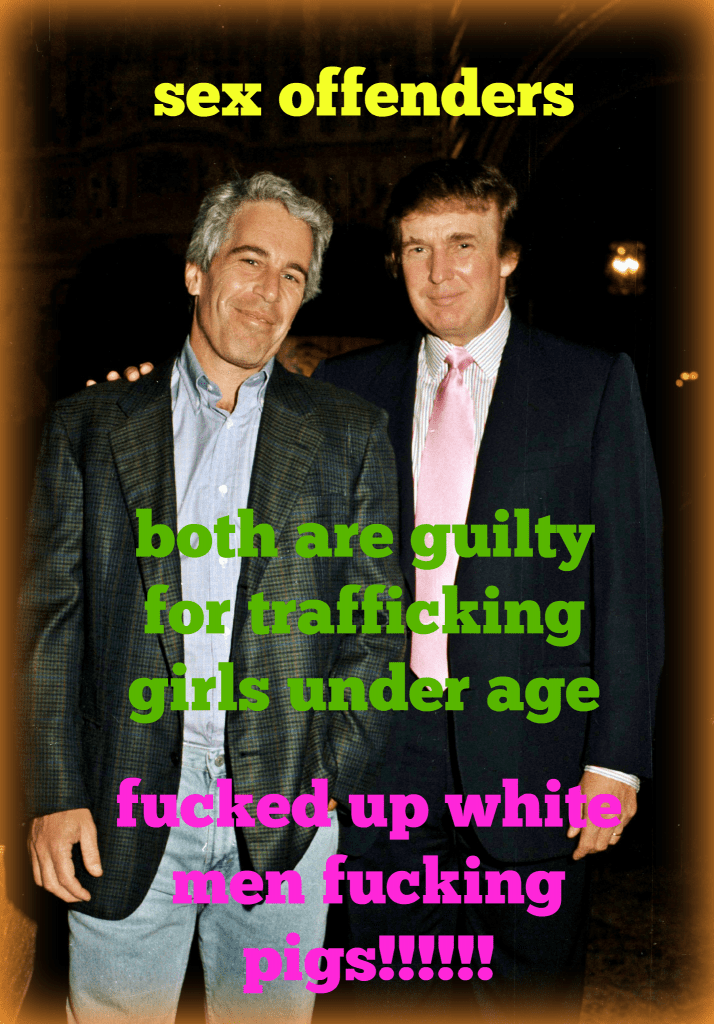 Trump has distanced himself from Epstein in the last several years. Epstein was murdered, fuck suicide, the dead can’t speak!!!

Of course, Trump is a liar and now talking like, “Hey I’m not friends with this guy!

Yeah sure, Trump,  are you afraid? You should be ASSHOLE, I hope your next. Fucking child molester.  If you associate with “child molesters” you “TRUMP” are a “child molester”.  You knew all along what this mother fucker was doing for over 25 years of trafficking, it’s too late.  You, Trump, are so guilty!! You can’t lie any more people know all about your bigotry, racism, sex trafficking, friends with child molester. I am very confident all those stupid little bitches just got tired of the shit. Getting older can have some perspective. Parents no longer taking bribes pimping out their daughters.  YOU SHOULD BE IN PRISON MOTHER FUCKER IN PELICAN BAY!!!!

A group of five women separated from their children after migrating to the United States to seek asylum has filed a lawsuit against the Trump administration, NBC News reports. The suit says the federal government caused their families “extraordinary trauma” via its “zero tolerance” immigration policy.

IMMIGRATION POLICY? WHAT A FUCKEN JOKE. THEN WHAT THE FUCK ARE YOU WHITE MOTHERS DOING HERE? YOU DIRTY ARMENIANS? YOU FUCKEN GOOKS FROM OFF THE BOAT? HOW ABOUT THE EURO TRASH AND ALL THE POLISH FROM BACK EAST AND LETS NOT FORGET THE FUCKING RUSSIANS!!!! ALL OF YOU ARE IMMIGRANTS

YOU MOTHER FUCKERS OF THE COMMITTEE OF 300 MAKE FUCKEN CASH OFF IMMIGRATION, BUT YOU ABUSE THE MEXICAN PEOPLE!!! RAPE KILL AND MURDER THEIR CHILDREN!!!! 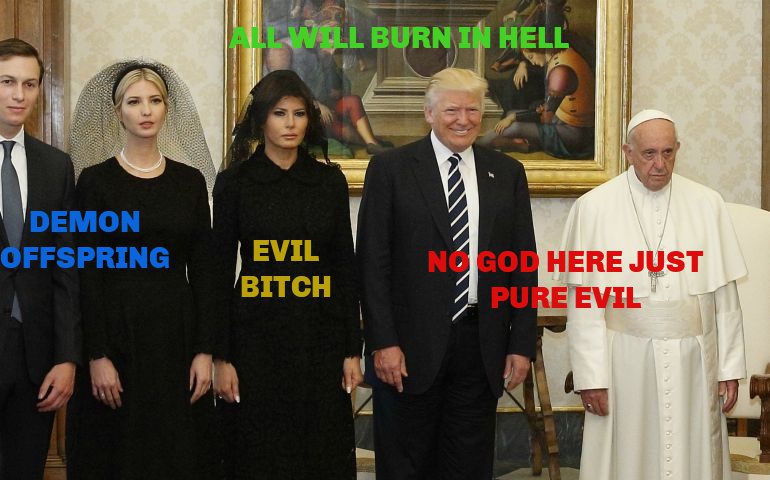 CAN SOMEONE HANG THIS MOTHER FUCKER ON A TREE AND BEAT HIM SEVERELY?  BECAUSE YOU DESERVE IT YOU FUCKEN PIG….EVEN THAT FUCKEN WHORE MELANIE TRUMP (WHO CAN’T SPEAK ENGLISH) YOUR MARRIED TO IS AN IMMIGRANT!!!

Zero tolerance, which started in summer 2017, included forcibly removingnearly 4,000 children from parents who crossed the border in a manner the government deemed “illegal.” Those children were later sent to migrant children shelters, foster homes and detention facilities. And many have already died because of neglect and abuse. That white trash fagot son of yours BARRON TRUMP deserves the same treatment!!  TO BE ABUSED AND MISTREATED AND STRIPPED FROM EVERYTHING, THAT PIECE OF SHIT DESERVES NOTHING!!!!!

As Color lines previously reported, experts have weighed in on the emotional trauma that comes with separating children from their guardians: people you can search for yourself, many children have died already because of this mother fucker and his racist actions. Be mindful of all that he has done and said, his actions speak volumes!!!

I know your stupid ass white people get crazy and start talking your shit about immigrants. Let me remind you mother fuckers, this country is NOT the white man’s land by birthright.  The white man is a fucking IMMIGRANT, you white people, like the blacks, migrate from European continents. Only the NATIVE AMERICANS are indigenous to this American soil. So get over your fucking bullshit. Everyone in this fucked up country are immigrants!! Except the INDIGENOUS AND THEIR KIN!!!