A very strange work experience occurred as I wasn’t given environment direction or training or feedback of any kind. A general air of paranoia seemed to permeate the aisles. I think it kind of depends on what manager you get.

I noticed another coworker who started about the same time I did, and her supervisor appeared to be spending a great deal of time training her. But there were definite signs of a toxic workplace overall. Yelling was occasionally to be heard coming from certain offices in addition to much gossip and backstabbing occurred. (review from a PIH employee found via the internet)

I found this review on PIH Healthcare from Indeed.com someone wrote it who worked for them, just in a different department than myself. After reading it I couldn’t agree more. I also wrote a review of PIH a few months ago and my intention was to exploit them further by expressing how this company hires management of the worst kind in the “food service area” of this hospital.

I have no doubt many of us have experienced problems in the workplace that are toxic. I know I have too various degrees. Teena Perez who is employed by Sodexo Corporation, yet holds a position at Corrupt PIH Hospital. Teena Perez is racist and allows a stupid, insecure fat pig named Roberta to be her personal “rat” stirring up chaos and trouble in the kitchen of the Hospital.

I just prefer not to deal with others stupidity and ignorance. Some of us deal with toxic environments better than others, maybe because it’s easy to ignore other’s or maybe because the person who deals well with this environment is the person whose kissing ass to the manager or causing the problems. I should have known it wouldn’t go too well when I reflected the time I interviewed with Teena (shit corrupt manager).

My first impression of the manager was less than zero. Teena Perez was a very immature, rude and presumptuous, white racist woman, but like Teena Perez once told me, I was just giving you the “benefit of the doubt”. That’s what I gave you and you fucked up, bitch! 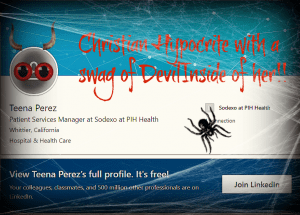 Here I will describe my interview with her. Teena called me to come in for an interview, first, she never gave me any kind of directions to where she was exactly. I naturally thought it was the PIH building on Whittier Blvd near Santa Gertrudes, no it was further down off of Washington. I did find it eventually on my own, which I was late because of this. The minute I got there an employee was already asking me what time my interview was? Now I know people ask questions because of course, it’s a way of gaining information. The “nosy employee” was not going to get an answer from me.

I ignored her since it’s none of her business. The three of us sat down together, Teena Perez, myself and Connie who was very nice (at least she appeared to be at the moment). Yet later Connie was sticking her nose in my personal business with personal questioning

As I describe my work history it seemed to be going okay, but at one point Teena behaved very immaturely when I expressed something about working a second job since I have responsibilities to pay, she mocked and laughed and turned to Connie next to her as if she expected Connie to laugh along with her. Example of Toxic Management in a Toxic Work Environment.

The young woman said nothing she did not indulge in Teena’s behavior at all. She kept a straight face the entire time. Now her actions told me something about this manager who behaves this way during an interview she is lacking in character and integrity.

By the time I started working it took nearly six weeks, soon after the interview Teena dumps on me how she needs a reference after I gave her three on the application. It was stupid how she bothered me to have a previous employer call her as if this person isn’t busy enough. I gave the information and told her exactly when to call because he has a 4 am to 3 pm schedule and Teena rolls in at 10 am or sometimes 11 am. A Toxic Manager Teena Perez who thrives in a Toxic Work Environment.

Not everyone has the luxury to sleep in before they get to work. They played phone tag for a while, but she sat on her ass and took her time with the reference. Finally came orientation day there must have been nearly a hundred people there. So I don’t know anyone nor was I introduced to anyone who would be working in the kitchen beside myself.

Teena later asked me if I saw the other person and I said no, (how would I know who they are)? Another stupid question, but what she’s really doing is “fishing”.  Later she comes back to me and complains about how there was another person there who was going to be in my department.  Okay, so what do want from me? I’m thinking. This is a real expedition she’s on.  Training began and right off I meet the one person who is the biggest problem in the entire department.

Roberta is one of those special needs type of nuisance who desperately seeks attention, insecure uneducated moron. Roberta the fat pig who is Teena and Laura’s personal “rat”. Roberta needs special attention, to be the apple of her manager’s eyes. The ass kisser, brown noser, backstabbing, insecure little girl from a broken home (named Roberta) who just needs to be adored and admired for being so wonderful. Frankly, she is a very manipulating, a malicious cunt that is the rat to the director Laura McNeil and Teena Perez. 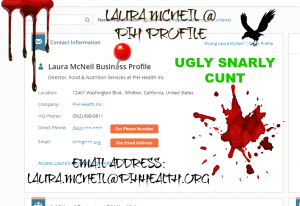 Because Roberta (this fat ugly, insecure trollop) will do anything and fuck over anyone who she feels threatened by, just to keep her job. Roberta talks the most shit, overstays 15 minutes on her breaks and is Teena’s main rat to cry too. Teena being as stupid as she is believes anything Roberta tells her, she takes all those lies and complaints to heart. Fuck the other party Teena doesn’t bother asking the other party what happened? The nature of the conversation? Get the facts straight, NO NOT AT ALL. Let’s believe the “rat Roberta”!!! Fuck the Other person, Oh I forgot, let’s give them the “benefit of the doubt”. GO FUCK YOURSELF TEENA, YOU STUPID RACIST BITCH!!!!

When it comes to training a new employee, it should be done by management, not by some idiot person who doesn’t do her own job accurately or effectively. When a person is trained by two different people it’s a real problem. Especially when the person who is the rat that, likes to gossip and carry long conversations with the nurses while training someone invites a Toxic Work Environment. She also disregards some of the work duties and doesn’t bother to tell the person she is training because Roberta herself doesn’t bother with those work details.

She complains all the time, crying to everybody who will listen how she came from a broken home. This moron was continuously whining about her family life, her friend who flaked on their trip together. Seeking advice from nurses about her personal dilemmas.  She is young and very immature and needs older women to cry to, who will feel sorry for her because she needs guidance and love that she didn’t get while growing up with a single mom.

No thanks, I’m not interested and I don’t give a shit, just grow up and get over it. I got sick of listening to her bullshit. There was a time during my first couple of days I was sitting with the girls and that’s all they did was gossip.

My break was over as I got up, Roberta has the nerve to tell me to sit down because the conversation is not over.

I just looked at her and walked off. Roberta sat there until 25 minutes after when the break is only 15 minutes. So if she can get away with a really long break, she will do what she needs to, to get away with other things. This includes making other workers life hell and lying about people to cause trouble so STUPID TEENA will believe her and so Roberta the RAT CAN KEEP HER JOB!!!!

There was only one person who was really nice in that work environment, the one person I would of like to have worked with, I wasn’t that lucky. It seemed every time I came downstairs after pushing that heavy cart through the floors of the hospital, I dealt with smart remarks, dirty evil looks from Laura herself. (The Director of Food Service).

She reminds me of the wicked queen in the castle who is looking to punish where she can, this bitch with her dirty looks and nasty tone talking at me like I was stupid. People (Toxic Work Environment) asking what my partner does for work as if it’s their business (that was Connie). Of course, people want to be nosy to have something to gossip about, when their bored.

What really annoyed me and confirmed my assumptions about Roberta is when she started to brag about knowing all the positions and how easy these jobs were. Yet she would also complain about how she has no life because of this boring job, but needs every dime to pay her bills. After all this bullshit she ends up with a position of delivering trays to patients, wow that is really hard work.

Roberta would bad mouth certain people she didn’t like and yet create chaos to have other workers side up with her. It was really a sick game she orchestrated and Teena being as stupid and blind as she is, bought into it, this is a Toxic Work Environment!

Frankly, why should I have to listen to Teena complain to me about her broke ass drug-addicted daughter getting pregnant from some loser?  It’s not my problem who cares, why, don’t you give her a job at PIH? That way she won’t have to be on welfare.

You can give her Roberta’s job delivering trays to patients. This is someone who keeps her bible and reads it daily but works for a company built on Luciferianism. Hahaha… I don’t think she understands the scriptures of being a good Christian because if she did, she wouldn’t be so fucking ignorant to allow someone like Roberta to get away with being a nasty little cunt that she is. It’s like I said Roberta will do anything to be the manager’s pet, to keep her job!