Tina Calce Smith (Zimmerman) in Bakersfield (works for American General Media) is a 50 something white trash uneducated female with a deepness for racist thinking. 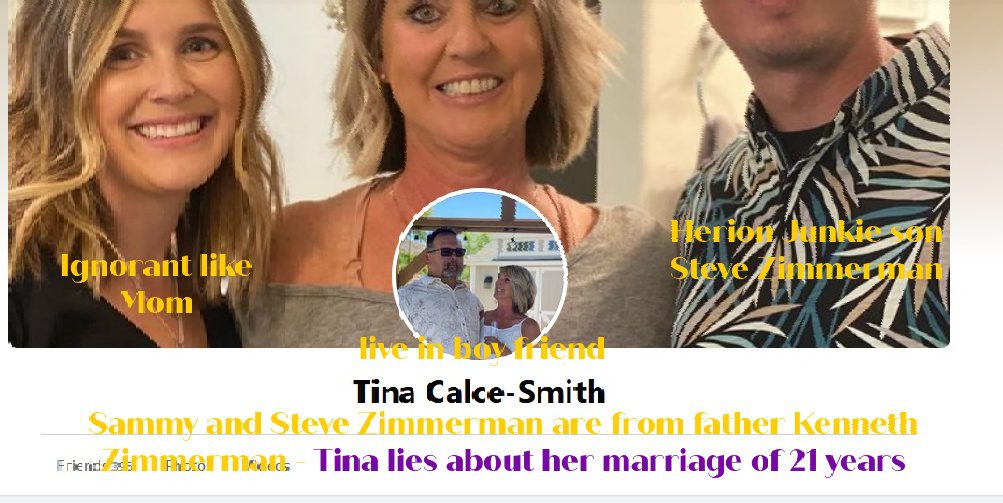 Tina works at American General Media whom makes a decent living. Yet she is filled with heartache and contempt due to her former husband Kenneth Zimmerman and son Stevie Zimmerman both were found shooting up Heroin together at her former home on Waterwheel in Bakersfield. Tina’s daughter Sammy is just like her mother with a snotty ignorant way of thinking and her son Steve Zimmerman is the disappointment of the family who is a Herion Junkie and Thief!

Tina is the kind of person who lies to herself and the world, walking around with a smile to hide the resentment she feels about her son and husband. Any person who knows her would say she is filled with optimism. No, Tina is an Ostrich with her head in the sand, lying to herself and the world she is “problem free”. When I first met Tina she lacked manners like most white people and yet sneered at me inducing her racist comments when she found me alone in the bathroom.

The only reason I bothered was so Todd (her brother) could see his family.  Since none of them ever cared enough about Todd to go out of their way to visit him. I thought it would be a nice gesture to visit during the holiday. Boy was I wrong.

So I bit my tongue that way Todd would enjoy his family during the Thanks giving holiday. Unfortunately we both witnessed how much alcoholism is in the family ending in verbal feuds. During this time Tina found her son and former husband Kenneth shooting up Heroin together. Why? She never had them both arrested and taken in when they refused to leave the house is beyond me?

Yet she unfortunately kicked Kenneth to the curb ending in divorce, but her son she felt sorry for and bought his bullshit that he was clean and found GOD. Regardless of his continuous Heroin addiction and robbing the neighbors house. When a person is a total fuck up like Stevie Zimmerman, NO JOB, it’s funny how GOD is now the salvation he claims he has found, but will never completely fulfill. 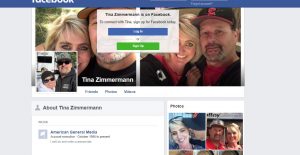 People always use GOD as their smoke screen, but never understand how to truly serve our Creator. Its just a matter of time before relapse occurs. WATCH OUT STEVE ZIMMERMAN ROBS HOUSES!!!!

This 27 year old white kid has no education, has been in and out of prison for years and will never stop doing recreational drugs. He is as stuck on Heroin as a junkie can be. I don’t really see how someone as stupid as Tina could possibly help her son or any other sinner living in the house, especially when TINA and sister Lisa Calce sit around getting drunk with dear “ole mom”, Barbra Calce.  This is a RITUAL in the family.

Let’s get the record straight both Tina’s kids are fathered by Kenny Zimmerman, but Tina writes on her Facebook, implying to the world only Stevie is and implies her daughter Sammy Zimmerman has another daddy. This is the perfect example of white trash lying to oneself. 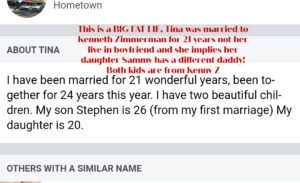 TINA IS FAKE, EVEN HER SMILE IS FAKE…NOTHING REAL OR HONEST ABOUT THIS WHITE TRASH CUNT! NO I AM NOT CHA CHA…. BITCH!!!!

Since this unfortunate occurrence has repeated itself in the family Tina has taken on a new boyfriend (pretending he is the husband of 21 years). A new grand child and now  building a new custom home. Continuous to pretend she is problem free, everything is great, but she still gets drunk with her mom and sister, somethings never change. Tina is a self centered CUNT,only cares about herself.  Neither one of these idiots have the will power to say NO! You would think Lisa would have the decency since she is care provider to her mother. Maybe someone needs to call “adult protective services” and IHSS? WHY NOT? ASSUMPTIONS ARE ENOUGH!!