The New Bruce Jenner is presently known as Caitlyn Jenner. I do not support homosexuality and I never will. It’s not natural for a man to be a woman. I’ve never really cared about why people are homosexual? Yet there are a few things about males being gay that do bother me, it’s inappropriate behavior in public spaces. When flamboyant males feel the need to show off their behavior on buses or trains with gestures advertising their soft side, it’s embarrassing. Or when gay males like to touch and feel another in public places, it’s disgusting. It’s inappropriate knowing there are children around and other adults who don’t care to view such behavior. 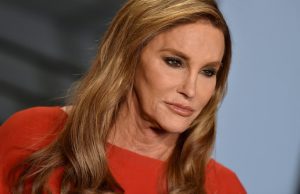 A gay male is easy to spot with the way he walks, or talks, bodily gestures and the clothes he wears.  When men feel the desire to become a woman, it’s seriously disturbing, and in reality, no matter how hard they try, “that used to be male” will never be a woman.  You were born male, so if you start to dress up and pop a few hormone pills to develop those curves you want so much it will make no difference. YOUR NOT A WOMAN, JUST A FAG!

I have to admit it’s also queer and very disturbing witnessing this transition.  Why a man feels he should have been a woman all along is a mystery to me? I can only come to a conclusion it must be a hormonal defect, OR HE FEELS INADEQUATE! I  am a woman and never had the feels of wanting to change my sex or my gender. I like being a woman in every aspect of it. Except for the unfair treatment I sometimes receive because I am a woman with lower pay than a man or being discriminated.  When my partner saw what used to be Bruce Jenner for the first time on his famous Vanity Fair shoot he was disgusted and had nothing to say. Well, actually he had a lot to say, which none of it was positive and that Bruce, excuse me Caitlyn Jenner had officially lost his mind. 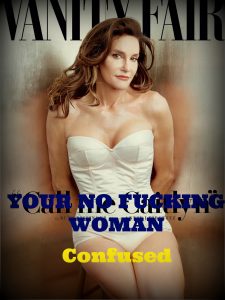 The New Bruce Jenner is Caitlyn Jenner who went too far, okay so you rather be a woman with a pussy. Sure women have more energy than men and are more creative in various ways. They can usually cope or at least appear to with life’s bullshit, the home, the kids and everything else they are expected to do. However, realism is men have greater power in society just being male alone. They make more money and receive more admiration than women do.

Living in Los Angeles seems to be an area that gay men are everywhere you go especially in West Los Angeles.  Only in the last couple of years though I keep running into males dressing like women all the time, too much. I can’t seem to escape noticing it everywhere in public spaces.  Isn’t it bad enough there are too many foreigners here and now this?  I’m just like “wow”,  so when my man sees men dressing as women, he flips out and voice’s his thoughts quite loud.  I have to tell him shhh… they can hear you.  Todd will never accept these men becoming women or just gay males it’s not natural.  It reminds me of what Valerie Sloane’s says about the male sex. She speaks on how men envy women, the cardinal desire wanting to be a woman.  Now I thought about this, either way if Caitlyn chooses to date in the near future is he or she going to be considered gay?  I think so, he’s really a man, so if he dates a man or has a sexual relationship, then it’s homosexual?  And yet if he or she dates a woman trying to pass or consider to be a woman in his mind then it’s still a homosexual relationship.

Geez.. even I am confused by this change and it’s not my life, but just knowing this occurs in everyday society, makes me want to flee planet earth where it doesn’t exist.  Where things can actually be just peaceful with zero population of homosexuality. I guess I sound homophobic myself. I don’t care if your gay really, but what the fuck, changing you’re sex and gender is serious? I do wonder if Caitlyn will endure  “sexual oppression”?

I never supported the gay community and I’m not going to start now.  I do wonder how the Gold Digger Chris Jenner (the whore of Babylonian) feels now that she is married to a woman-)  is she now being viewed as a gay lesbian wife?  Gee… I wonder if she feels responsible for her husband now gone wife, changes?  She probably turned his ass this way she looks like the demanding bitch type.  How could she have not known all these years Bruce wanted to be a woman and still remained married, of course, millions of dollars that’s how?

The New Bruce Jenner has the money to live his life as a woman and yet thinks it’s okay to support those who don’t have that kind of freedom. Vanity Fair supports him and what really pisses me off about that shoot, is The New Bruce Jenner representing himself as being a woman according to standards of how men view and expect women to look in society. How many straight men are wanting to date him now, maybe millions? Good luck, Bruce, but you don’t have my support you were born male and will always be male in my eyes.