The Devil Wears Dior, I have no doubt this woman has committed Fraud, but she is one of so many. The media and law enforcement in Australia is just as stupid and morally retard as the people in the United States.

Wake the Fuck Up people, of course we live in a fraud mundane world, eventually you will be caught. Money is fake, it’s a concept that tempts us the desire of wanting more. The only major factor and difference is you can’t commit Fraud in the world. The only corrupt people who can are the Committee of 300. Melissa Caddick is NOT a part of that GANG, no more than Bernie Madoff was. Bernie was made an example, because the ELITES were scared of him. His intelligence pulling this off was BRILLIANT LIVING OFF THE WEALTH OF OTHERS for over 20 years?

The Committee of 300 does everyday, and people just refuse to see it.

People need to pull their head out of their ass, this enitre globe is FRAUD, every system and false state and federal agencies are FRAUD. The money system we live under is FRAUD, even the ELITES ARE FRAUD AND THE BIGGEST GANG BANGERS and THIEVES OF ALL TIME!!! THEY are NOT LEADERS, their CRIMINALS, but you stupid people of the world refuse to see it that way. The BANKING SYSTEM is the BIGGEST FRAUD SYSTEM IN THE WORLD, because the Rockefeller’s and Rothschild’s FOUNDED IT THAT WAY!!

These GREEDY COCKSUCKERS had more money than any bullshit USA CORPORATION calling themselves Government.  Once Gang A, put all their money and brains together is when they decided to rule the world through the BANKING SYSTEM. That gave them the Power they needed to rule over the USA CORPORATION and other so-called bullshit Governments in the World.

They care nothing about laws, they are the main GANG BANGERS TO CONTROL THE WORLD’S WEALTH.  See all global government have to adhere to the Federal Reserve and the World Bank, this is WHY NO SO-CALLED GOVERNMENT is ALLOWED TO MAKE THEIR OWN MONEY!  If they do they will be dead. Just ask Kennedy and Lincoln. Oh I forgot, its the reason they were MURDERED!

Now that I just gave you a brief history lesson, Melissa is probably hiding out somewhere, but how long can a person do that for? She won’t be able to enjoy the money she stole, and I’m sure she has tons of cash and a safe house, but she’ll show up. They always do.  Law Enforcement in Australia is highly corrupt allowing her to get away. All Law Enforcement is corrupt, allies of the Elites.

Hey Polanski had no problem escaping from Law Enforcement once they were paid off, That piece of shit needs to be blown away, being the CHILD MOLESTER THAT HE IS!!! This is the real reason his wife was MURDERED because she knew of his dirty secrets.  Let me say, its the reason why the MASON family was continuously being in the spot light because it  kept POLANSKI from being accused OR of any participation!!!  Don’t you just love it when people are paid to escape from their crimes?

Melissa will show up either DEAD or ALIVE, BUT HER husband knows everything, he is NO Innocent. Isn’t it interesting how the FEDS came in to question her but didn’t bother watching her and easily let her get away? And her son, knew exactly what time she left out the door 5:30am. Her husband waiting 30 hours? Well its 24 hours before cops will bother with an adult missing, so topping it off a few more hours is no big deal. Yet that stupid cop in the interview was DUMB to say how 30 Hours put them behind.  Tripping up the public. The Media always find the right STUPID PEOPLE TO INTERVIEW. Right for the PICKEN!! 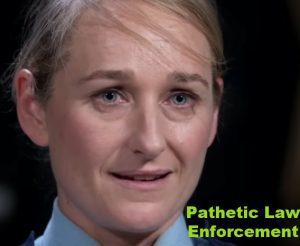 Yeah 24 hours has to go by before you would bother looking anyway. This interview is all bullshit and the family are liars and very guilty. This stupid white cop is an idiot. its amazing how dumb ass white women get hired such as her.

See, when your DUMB shit to trust someone else with your money, your own GREED JUST GOT THE BEST OF YOU!!!

STOP BITCHING TWEEDLEDEE AND TWEEDLEDUM!! SISTERS!!! What is wrong with this picture, this stupid woman invests her money and yet she is borrowing clothes from Melissa Caddick? 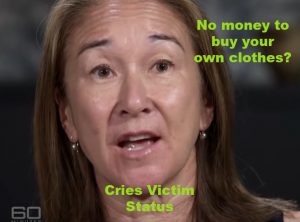 How stupid is that? I guess that investment didn’t pay out?  Why would you fall for that? Borrowing some else’s clothes? Never give someone your money to invest! Do it yourself at least then if your lose or fail, it won’t hurt as much. Dumb Dumb.. These bitches are so stupid!!!  They have no one to blame but themselves.  I doubt law enforcement did anything. This pathetic white female cop is another idiot. It doesn’t surprise me as the media being racists they glamorize this female cop.  Law Enforcement is just as fucken retarded as the dumb bitches who trusted this thief with their cash.  Stop crying victim, you only have yourself to blame!