In March 1977, then 43-year-old film director Roman Polanski was arrested and charged in  Los Angeles  with six offenses against Samantha Geimer, a 13-year-old girl rape by use of drugs, perversion, sodomy,  lewd and lascivious act  upon a child under 14, and furnishing a controlled substance to a minor.

At his arraignment, Polanski  pleaded  not guilty to all charges but later accepted a  plea bargain  whose terms included dismissal of the five initial charges in exchange for a guilty plea to the lesser charge of engaging in  unlawful sexual intercourse with a minor.

LAW ENFORCEMENT ALLOWED THIS PIECE OF SHIT TO GET AWAY. Do you think if he was a Black Man or Mexican this mother fucker would have been able to get on a plane and fly to another country to save his ass? Of course not. He has plenty of friends in the Movie Industry and Government who are Child Molesters and Sex Traffickers who helped him out, lets not forget paying off the JUDGE!!!

The White Race has made sure over centuries of time, their crimes go unpunished for theft, corruption, stealing from consumers, abusing and killing their kids and known as BIGGEST CHILD MOLESTERS!!!  Polanski had his former young ignorant wife KILLED, BEATEN , RAPED AND HER BABY WAS TORN FROM HER BODY!!! He met Charles Mason by chance, really he seek them out, promised them monies of course, but they were never paid, only arrested for killing Polanski wife Sharon Tate, because POLANSKI told them to KILL HER. People don’t just travel on foot through the Hollywood Hills by chance and know who is alone.

It was arranged, his young wife was going to leave because she found out he was a fucken pig molesting kids. Law Enforcement and Judges paid off to allow a murder and rapist to live else where with freedom and still making money directing movies here in the USA. This mother fucker needs to be annihilated and fed to the HOGS!!! This PIG IS A CHILD MOLESTER! 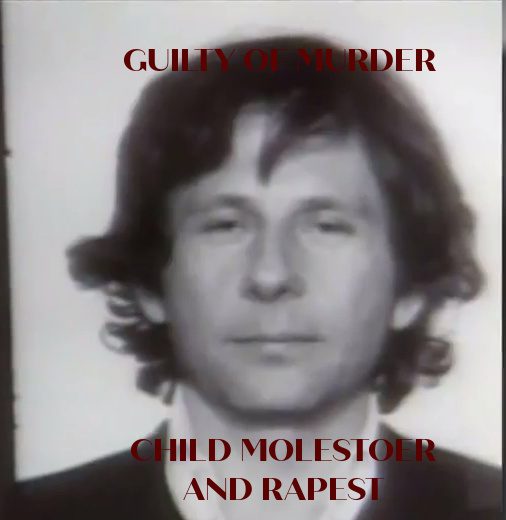 People need to realize, when the media BRAGS about people like Charles Mason for over 40 years, its a way of say “hey I am bragging and letting everyone know, I just got away with murder’, but the media will focus on the actual killer so it provides less distraction to the one piece of shit who is truly responsible for setting up the SLAUGHTER.

Roman Polanski is a Murderer, Rapist and Child Molester!!!!! This mother FUCKER probably rapes and molested his own kids too, many WHITE MEN do rape their kids. ROMAN NEEDS TO BE ANNIHILATED!  LAW ENFORCEMENT ONLY “PROTECT AND SERVE” THE FALSE GOVERNMENT, THE VATICAN,THE ELITES AND ANYONE WHO CAN PAY FOR MURDER AND KILLING KIDS!!!! The problem with people in this country to scared to stand up and fight against the WHITE RACE MURDERING, RAPING AND BEING CHILD MOLESTERS!!!! JUST LOOK AT THE WHITE HOUSE ITS FILLED WITH PIGS AND MURDERS!!! BABY KILLERS!!!

In the last 10 years many people who thought their sins and crimes would go unnoticed have been exploited finally. For those who knew of such crimes and allowed this kind of behavior to go on, are just as guilty of those committing the crimes. Many actors turned a blinds eyes because their reputation and acting career was more important than another human life who is being abused by sex offenders. The movie industry is dead with no originality, no decent writers, too many sex offenders and rapist, and now that Weinstein and Crosby have been incarcerated. The business is dead, you actors better save your money and downsize, because your careers are dead!  It’s over. The Movie Industry had too many CHILD MOLESTERS!!!

Allowed to live and do what ever he wants freely, law enforcement does not protect citizens, they protect child molesters who are WHITE MALES!!!!!
Law Enforcement only protects and serves the white man who is a MURDERER and CHILD MOLESTER!!! PROTECTS the ELITES and FALSE GOVERNMENT we live under and who control our way of life.

White People are the BIGGEST PROBLEM FROM THE PAST TILL NOW, it hasn’t changed, this NATION OF PEOPLE have moved backwards and have lost our power. It’s a FIGHT FOR FREEDOM and we don’t have it, nor can we stand up against it. Why? TOO many fucken foreigners who are too stupid to understand living in AMERICA. The IGNORANCE keeps people in fear.

DUMB MO’FO’s who support and believe this FALSE GOV. because they think it will benefit them, it won’t! People won’t fight because they don’t want to be without a home and the convenience of services they depend on! You may end up losing regardless and don’t think you can’t, because you can and ONLY then will you know what it feels like to be on the streets with NOTHING!  Churches don’t give a shit, they are like any other corporation. The RICH only give a shit about their  GREED.  There less than 325 years on this planet and the HUMAN RACE will be completely wiped out. The WORLD’S BALANCE is dying. Fuck Roman Polanski you fucken scum child molester!!! Burn in Hell!!

Growing Up as A Chicana