Racist White Collar Criminal Brian D. Oliver, Global Tel-Link CEO. It never seems to amaze me how the WHITE MAN is the largest white collar criminal who walks the earth and needs to be beaten and horse whipped and placed in a dungeon. Brian D. Oliver, Global Tel-Link CEO is one of them, he is a WHITE COLLAR CRIMINAL. Brian steals millions of dollars from American hard working people daily, more so than Jeff Bezos and he does it through telecommunications.

One can argue that these services are necessary, and the market is merely providing services, even to those in jail. However, it is clear the income generated by providing these services is stimulated by government created demand for them. Attn reminds us “the War on Drugs has also created ballooning prison populations by increasing arrests for petty offenses (such as marijuana possession). America has the longest first time drug offense sentences (5-10 years) of developed nations. …65 percent of private prison contracts require an occupancy guarantee. That means states must have a certain amount of prisoners — typically between 80 and 90 percent of occupancy — or pay companies for empty beds.

Talk about bad incentives — a state throws money away if it does not have enough prisoners.” There are a lot of people with a lot of money riding on maintaining or increasing prison populations in the US and abroad. Racist White Collar Criminal Brian D. Oliver, Global Tel-Link CEO

To drive the point home, the Washington Post reported in 2015 that “several reports have documented instances when private-prison companies have indirectly supported policies that put more Americans and immigrants behind bars – such as California’s three-strikes rule and Arizona’s highly controversial anti-illegal immigration law – by donating to politicians who support them.” 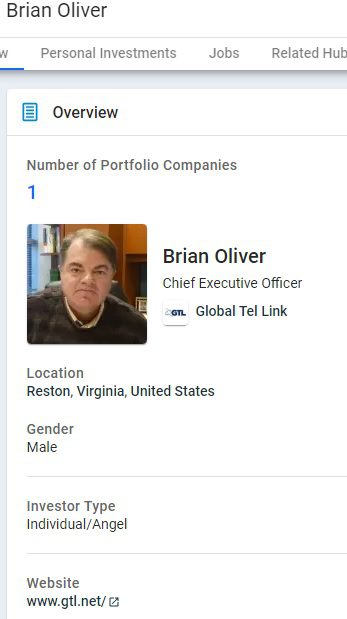 I am personally sick of this shit with corrupt CO’S who refuse to deliver emails and packages on time. Scum like Brian Oliver whom make a habit of stealing money from debit cards as I place $10 dollars for calls and Brian Oliver steals $6 to put in his pocket.  Left with only 2 calls and less than 3 minutes per call. I was also owed $13 dollars from a previous account because every time a person changes their number, the money is never rolled over to the next phone number. So therefore the check I was sent back was only $11 dollars. Again I was ripped off by $2 dollars Oliver sticks in his pocket. Last the emails I pay for stamps which after 5 sentences is considered a page where no line is indicated. Yet until your ready to send the email which appears like a full page is really 3 to 4 pages and that is how many stamps are taken. So in reality it’s never a letter its a short message to use only 1 stamp again RIP OFF!!!

Is this scum bag racist a fucking thief or what? If anyone mother fucker should be in fucking PRISON IS BRIAN OLIVER!!!  Its time Brian Oliver get a taste of what its like to suffer. His face says it all, doesn’t it? White Collar Criminal Brian Oliver.