Prostitution in America is common, more common than anyone wants to admit. Some women are condemned for it, others are praised and provided with great “pr”. In California alone there are over 300,00 thousand workers of prostitution. Now with Covid going on whose to say how that will hurt their business? There are two main reasons why hooking is illegal, it can’t be taxed and pisses of IRS and Uncle Sam who is a THEIF!!

The second men want to own PUSSY, and many of them expect women to help out their cock like its our job or something for FREE. This is where they believe in the deluded minds its an obligation of services.

I personally don’t care, she is just a hypocrite of her trade. It’s obvious to me her reason for desperately showing her face and going on live video is because her sales must be down.  Back in the day when she first started her price for prostitution was $4000 with a 4 hour minimum. Now it’s $2000 Up to 3 hour minimum. It’s possible you could get 3 hours, but not likely.

Amy your getting old. Just because some women look better than other’s doesn’t mean the service provided is justified. Yet politicians justify murder so I guess its not as bad.

Hookers and Escorts of another kind who work in the Adult Biz. Women such as Pam Peaks or Mercedes Ashley who are getting old, not a different breed or different standards. Just different marketing. It has me curious, how long can you keep selling your ass? I’ve actually met Pam Peaks and I have to say she looks worst in person. A true nightmare but if she wasn’t “pimping and pandering” she wouldn’t be able to financially survive.

Same for Mercedes she also “pimps and panders” to financially survive. Rumor has it Mercedes has HIV so that can impact a person’s business. Why men would pay to have SEX with someone who has HIV is lethal, but then men still want Pam Anderson and she has HEPATITIS.

Now like Pam, Amy Taylor also indicates “her friends” so she too must be pimping. I assume Amy has never been busted crossing state lines, because that in itself is a “FELONY”. I’m very surprised the police have made no effort to go after Amy, but if they did I’m confident her “attorney” is on standby. Of course Pam has, but Pam has been busted numerous times only to add no taste and is common white trash. She has no class, but she will never cheat you on money. Mercedes works for herself with friends stripping and other prostitution services. She too has been on YTube blatantly admitting to all of this and she is correct. Most women in the adult biz are hookers. It’s the only way to capitalize on a persons income.

A different kind of prostitute is Women Who Marry Wealth. This doesn’t take much skill (just time invested). It’s all about playing up to a man to make him believe he has a real catch. This kind of female is very good with lies and manipulation. Just about every white female who is trained as a small child is to marry well. Mommy and Daddy don’t want to keep supporting you. So get a job or Marry Money. Something this lazy bitch has been trying to do, the media calls her a social lite, but she is NOT only a white whore trying to marry Benico. Kimberly Stewart 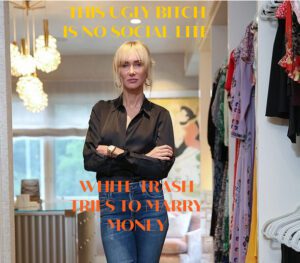 It’s also been known for girls to marry older men. Many parents allow this here in America. It is pimping out your own daughter to a man who is her Senior to be dominated and provide male children. Unfortunately this might fall under many religions and cultures or just because he can afford a financial dowry. Yet abuse and being under a mans thumb usually comes with this kind of commitment. Before you know it the girl is either dead or in divorce court with her life ruined ten years later.

Then you have white women and some of color who are just plain “HUSBAND HUNTERS”. These kind of women make marrying wealth an art form.  A not so new meaning of prostitution but it’s still prostitution just the same. Instead of several clients, you only have one. It just gives pimping yourself out to have a financially secure life style because these kind of women are too lazy to work. Being a trophy wife is much more tangible. At least until your so old your husband no longer cares who you are and is looking elsewhere.

Money is not the “root of evil” as it has been said, people are. Since society is driven by the means and statues which in reality is an illusion that most people don’t want to face. Having a false sense of identity is worth more than character, integrity and self worth. If these attributes meant anything to any human, the evil that broods in the WHITE HOUSE would think twice about the human trafficking, drugs, prostitution, war, murder and gang banging on other countries. All this crime would NOT be a problem in everyday society. Prostitution is not just a job, it’s a lifestyle.