Nothing is more frustrating having to deal with lies and more lies….coming out of people’s mouths. Poor Representation with Ainbinder, and Pratt. When I sued Bristol Farms in May to report the damages I had endured, I didn’t expect to pay for a lazy attorney.

I expected at the very least that my attorney would communicate to me with no problems, but hell communication is so time-consuming why the fuck bother, right?  Just three weeks ago I was told that my case after suing Bristol Farms finally settled with a good chunk of change, which I was really surprised and pleased to hear because as I was told from Nick (who is an associate) said, these types of “work comp cases” usually fail. 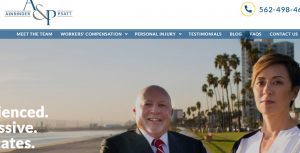 Then just yesterday I get a call from someone, a woman Mirella Flores at a school stating that I could be eligible for an educational voucher valued at $6000 dollars. That way I can be trained for a new opportunity in the workforce.  I told the woman I knew nothing about it, but I would get back to her after calling the office.

Before I left I confirmed with the law office about our conversation, since Ainbinder and Pratt never mentioned anything to me. It was never really confirmed if my attorney gave Flores my information. However, communication is something they really lack with their clients. Pratt is a poor representation and didn’t do much to assist me in my case!

I thought this is a new start when Mirella Flores called, so I traveled all the way to South gate to some shit hole place, a one-legged horse institution that didn’t appear very attractive.

First let me start by sharing what I do know, this type of voucher is a new program that has been passed from the State of California for those people who can not return back to their original jobs once they have settled a “workers comp case”.

Now I don’t know much about it, because it’s fairly new, but it’s being backdated from past cases for those people who are entitled to it. What I was told is that school reps have access to cases of people they call, persuading that person to enter into their programs.

Now it was pointed out to me that this person, might be getting some type of commission for it so I was to be careful. The school has to be an accredited college which most community colleges and some university usually are.

Now this woman Mirella Flores (who made a claim to me that she worked for (“workers comp”), this is what she told me when I met her, but yet her business card says she is ” associate director”.

At this point, I’m assuming my attorney is the one who contacts her into calling me about their programs.  I’m really pissed off of how my case has been handled, poor representation. The law office had me going to doctors that placed me on disability which through social security I was able to obtain some assistance.

As you may know, not everybody who works pays into the system if you get hurt. SSI will pay you a percentage when they review your work history however its a claim but its a hassle getting it started. Which in turn takes nearly a month to see anything and it’s only temporary.

One problem with poor representation who had me going to doctors that were not within the network of “workers comp” and I never did see one. This was not good it’s essential I see a doctor in the network to support my case.

It was all because the adjuster wouldn’t fucking approve of it, it was to block me from moving forward and time heals all wounds. She is employed with Zenith Insurance who is Claire Versailles that works for the enemy Bristol Farms.

Now, this is an ongoing fucken game because in all reality no employer wants to pay “workers comp”.  FYI if you’re an employer in California who refuses to carry insurance because you’re a cheap-ass you will have major financial repercussions.

If an employee gets hurt your seriously fucked as it is required by law to carry this type of insurance. I’m sure the employer’s premiums are impacted when workers start a claim against the company. Oh well, that’s their problem.

So as the games continue back an forth, communication being a problem, and Lynn Melilo (who works at the Bristol’s Corp) being in charge of my case is a straight out fucking liar and manipulator.

During the many conversations, she was constantly putting words in my mouth, very manipulating with the situation twisting circumstances around even the sound her voice was annoying. She was the one whom I needed to confirm my work restrictions either to agree or not and she refuses to do so before July 1st, 2015, which was my return date back to the market.  Instead, she played games with me on the phone and refuse to give me an answer.

Later on, I found myself extremely angry and I had contacted my attorney to tell her lets to drop everything, I am done I guess she never did, because the next thing I know after I sent Lynn a very nasty email, they had approved my case and settled.

Now you may be asking why am I not being given this voucher because I should be.  Why?  I can only speculate this fucking adjuster and the rest of Klu Klux Clan blackballed me in stating I was the one who denied working back at the store.  Now I am fucking pissed off.

Really? these mother fuckers are fucking liars.  At one point feeling low about the situation I contacted that cock sucker Adam Caldecott (VP of Bristol Farms) asking for my job back he never fucking answered me. Tony McAndrews is no better a lazy racist asshole.

One day I was really fuming about everything and I sent that nasty email to Lynn and that bitch jumped with blowing up my phone, calling, leaving messages, sending messages.  This, of course, took place after July 1st because telling her off and Adam I had nothing to lose.

Yeah, my case settled but these assholes have my own Attorney believing I denied going back to work. Talk about betrayal.

I have communicated to my attorney the way these people are with their blackballing shit the corruptness to even letting it be known how they pay off employees when they get hurt.  They have pressured workers to sign off on safety techniques that were never demonstrated to us and this was to only cover their ass.

And now they think they’re going to have the last word by lying about me denying work? I am the one who is fucking unemployed.

I am disgusted with everybody but I have already contacted the proper people and will be appealing this to obtain that voucher as I STRONGLY feel I am entitled to it.  Bristol Farms should be thanking me this is not a “sexual harassment case” as I could have made it one.

Lizardo Estrada’s manager of produce has made many sexual advances to me (and other women) when I worked there at West Hollywood store. In addition, he bragged about his sexual conquest with two female customers.  This is a guy who likes working overtime hmm …..I should have considered a different claim it might have paid higher dividends!!!