It wouldn’t surprise me that police officers are trained to racial profile upon entering into the academy. Now I have no evidence of this, but with numerous racial encounters people have experienced, it seems far to obvious it’s a strong possibility.

Police profile anyone young and appears suspicious, anyone who is a person of color particularly American’s who are Black or Mexican, they are less likely to profile Asian American’s and other whites like themselves or anyone female who is very attractive and let’s not forget someone who might appear to have money. If someone drives a nice car or wears nice clothes or a homeowner then of course that citizen is favored compared to someone who is neither of these things I described. If we go back into the past and pick out a state such as Mississippi, let’s take a quick peek at how African Americans were treated. 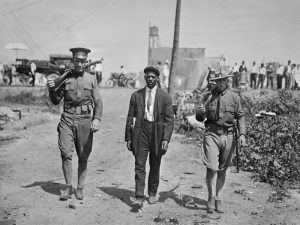 In July of 1917, there was one of the most brutal riots against African Americans there — scores and scores of white folks attacking blacks simply for being employed in wartime industries. There were indiscriminate attacks and, in effect, lynchings: beatings, hangings of black residents. So the fact that St. Louis didn’t erupt in the ’60s is almost an anomaly or an outlying story. Because St. Louis does have very tense race relations between whites and blacks, and also between the police and the black community. 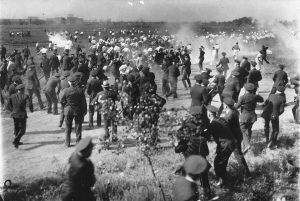 This isn’t the first time the National Guard’s been called in against black protesters. Overtime society has struggled to change and that change has occurred in small doses, but people of color , all people have still been racially profiled and treated differently than whites, by law enforcement. Just last week I was at the library, and some moron decided to call the police and accuse my partner of waving a knife around. Forty – five minutes of time pass and the three police officers decide to show off and make a big scene about it  when approaching us. Officer Hines of Fullerton department asked if we had a knife I said no, but that there is one in my glove box in the car. What had occurred was I was trying to prying some medication capsules apart, which are in jelly form that had stuck together like a rock from the heat.

My fingers wouldn’t do the trick. So after explaining myself I was asked to be searched, I said go ahead I have nothing to hide. Then I was asked to be pat down and I said, what if I say no, the female cop responds,“then I’ll have to search you anyway”.  Meaning if I say no it would be as if I were resisting. There seems to be an epidemic of people with vengeance oozing out of people, who knows why?  I soon left after my quick encounter of being racially profiled. I forgot to mention I was patted down, but my partner who is a white male was not. Of course the cop lied to me and said he was and I have been refused to see the surveillance tape as I requested from the director of the library. He said the police have control over that.

Maybe its a deterrence from not wanting to let me see the tapes, I have no problem being wrong. I just need to see if I am. Frankly, I think everyone is afraid of me being right! Both the Manager of the Library and that White Cop Hines are both FUCKEN LIARS! FULLERTON IS A CORRUPT POLICE AGENCY AND MURDERS. NO ONE WILL FORGET THEY MURDERED KELLY THOMAS!!!!

Officer Hines expressed to me he’s not “racist” and because there was such a diversity of cops during the time I was detained of Hispanic and white no one here is a racist of course. He’s also not racist since his kids are Hispanic and wife is Mexican, wow I’m impressed a real white cop who marries a Mexican woman and he thinks it makes him less colorblind. People in society lack to have a true understanding of how deep racism is in society. For this is why ignorance remains deep in the hearts of all those who are.