Just read everyday media and you will see, white people commit the most heinous crimes and yet they only get a slap on the wrist. They are the biggest trouble makers and Patrick Flannery is no except to this social problem of racism with his Buddy Anderson Cop who work together setting up people of color to fuck them out of money so Flannery can keep his shit job and Anderson can be viewed as an honorable cop. There is NOTHING HONORABLE about either one of them, their racist, and thieves, lying in court to set people up.

Patrick Flannery racist judge only dismiss’s people in any court room if  First the cop doesn’t show up to court Second  if their is no evidence provided for him to convict. On that particular day it was because a few cops didn’t show up. The game is rigged this is why the corrupt lying cop has the burden of proof!

Rumor has it though cops are now paid to show up to court, so it’s a WIN WIN for both judge and corrupt cops.  Internal Affairs needs to know of this abuse.

Flannery thought he was funny mocking all people of color in the court room for those few he dismissed saying to them, “NOW YOU CAN GO PLAY THAT LOTTERY”! He thinks it’s a harmless remark, but he knows people of color and poor people play the lottery the most.

See traffic violations are not about Justice, it’s about money and how much money a crooked racist traffic  judge can fuck people out of, so he can keep his shitty fucken job!!!

Patrick Flannery racist judge who wasn’t supposed to be the judge that morning took over for Nguyen Lan Quoc.  It says so on the paper work. Patrick is just a “pro temp douch bag”. The reason racist pricks do this is to fuck people out of money is so he can keep his job. It’s about Revenue, this is why corrupt racist cops are friends and golf buddies with racist judges!!!!

He welcomed the cops that morning and threw out the red carpet for each one of them, with a big “welcome back”!!!  Hey Flannery I have an idea get on your knees and suck dick too while your at it! Anderson likes it being your BITCH! 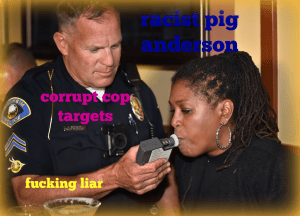 The crooked cop who lied was this asshole right here Officer Anderson of Anaheim Police. He lied saying I ran the red light, which I never ran anything. I was at the railroad waiting for the light to change and he was parked across the street with his buddy waiting to target people. So he decide to target me, then lied about the situation so he could screw me out of money.

Patrick Flannery is his buddy and was welcoming him back because Anderson does a good job at targeting people of color and screwing them financially.

Rig the Game for Money

Oh I forgot to mention there was one white guy who looked like a hillbilly in the courtroom, out of 20 people of color. See the numbers are always off and the game is always rigged for the white man to benefit. You know us people of color have to keep  those nice fucked up white  folks living well and living large at the expense of others.

One thing about Anderson he acts like a “billy bad ass” when walking over to the car. In the courtroom though he is all “BITCH” a total fag, wimping down to the judge.  Acting like the victim. Acting like he does no wrong, the nice guy, the fair white man, what a fucking joke! Liars and Thieves!!!!!

This is what Orange County is all about and it’s surrounding areas are made up of. This county has no honest white people, hell most people are liars and thieves in this county. They don’t even help their own people it’s the reason why the homeless exists. I pray to the devil You fucked white trash burn in hell!

In addition to Flannery and corrupt courtrooms. We have corrupt and bought judges.  Also, we have Trump who is no leader and a child molester as president. Third, we have racist cops who kill and rape women. Let’s not forget Fullerton PD they murdered people at train stations. In addition to that cops harass people who are homeless. Of course, it’s because of those greedy white people (elites) is why homelessness exists more than ever today.

Isn’t America great? The white man has corrupted our system all because of greed and now it’s falling just like the Roman Empire did centuries ago.

Covid is What I Expected