New Age Occultist are re-inventing the Wheel using contents from the Bible and other literature that was left out of the bible. Their publishing books from this pre written work and writing their own Gnosis of Creation, Witchcraft and Satanism.  And this is what I want to talk about, this author did the very thing I am speaking about.

I want touch on aspects of the book LIBER LILITH from Donald Tyson. Some of you may know of Tyson who is an occultist, but not that great of a writer. I recently found a book called, “Lost Scriptures”, it’s based on how creation was in the heavens, before man existed and the understanding of Samael, the first Archon who is known today as Lucifer; to many Christian Bible Beaters and hypocrites. So before I get into my discoveries, let me first begin here.

I want change gears and speak of a different subject than my usual rants. Generally my intentions are to incorporate more feminist talk, which there is much to say, but I want to grab the attention of my readers because witchcraft is a big subject that is practiced among many young people and older. Let me start by saying I have no interests in new age kids, especially the young girls. First I don’t think all of them know what their talking about only because they never hit home with an historical understanding of witchcraft or the understanding of creation.

And many of them are only out to make money from witchcraft. Also, their focus is on the present idols and Gods such as Hekate, or Lilith, or how to become a witch?  Really? How does a 25 year old female really know what it takes to become a witch? Especially when you haven’t learned how to finish becoming a woman?

Now every human goes through their middle life change and that is based on “identity”, knowing who you are and that is only one side of yourself, most people never confront their shadow. Hell, not even I have yet, but I intend to, very soon, because I want to know my darker aspects as a human being. And then there are those who run from their shadow and are extremally insecure, so they’ll never know who they are at all. Uptight, fridge little girl who is the rat at work, the crier, the victim, you get the picture.

Now that I have my cynical thoughts out of the way, let me move forward in this last couple of years I slowly started exploring witchcraft in my personal life because I had numerous problems and pressures. I needed support and no one was there for me, but then nobody every really is when it’s serious, as you will find out for yourself in life.  I was in need of support so I turned to the Goetia Spirits, Lucifer (Dark Lord), Hekate (my spiritual mother). When I was very broke and taking care of Todd, the universe answered my prayers and money appeared in my favor immediately to support us.

Now I am going through transformation in my life. Let me share with you later some of the interesting areas of spirts I experienced during this time, but for now let me graze upon Liber Lilith a book Donald Tyson wrote from notes of a man named Steiger who committed suicide after invoking Lilith the Seducer. Tyson claimed he had to make up a good fraction of the book in order to publish Steiger notes. Frankly I don’t believe him, but whatever.

Personally I had a difficult time believing this story was made up off the top of his head. Every writer needs influence, they have to, it’s the only way to generate ideas and motivation to write a story,. So I did some digging and found a book that Tyson used to copyright a good half of the Liber Lilith that he published. 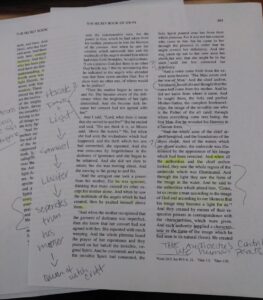 When I first found this copy pdf, floating on the net I was so fascinated with Liber Lilith, the story of Barbelon the heavenly Adam, the Shekina of the Creator (whom is basically the feminine aspect of the Holy Lord). It’s very romanticized and just wanting to understand the mysteries of our universe, the spirits, the avatars, the demons, angels, we are not alone. As humans we are blessed with walking this earth and yet, as humans so destructive, abusive. You get the picture.

Okay I was going on another tangent. “Lost Scriputres is written by Bart Ehrman”, it was published to provide understanding of how scriptures and so much information is deliberately left out of the Bible. It’s with intent, because the church and the state do this to control the masses. Yes folks we are slaves being controlled and you know who hides most of the worlds secrets?

The British Library, the Brits are always stealing and taking possession of artifacts that are found, controlling the gold and silver, not to mention the world bank.  There I go again, okay the point is, the Elites don’t want us knowing the truth of MAGICK in this world, or how the world was actually created.  Because of this, now we have Witchcraft on a Rampage with so many people who truly don’t understand it’s nature.  I want to understand it’s NATURE.

I want to understand what my purpose is, in life. I don’t want to die knowing it was for nothing.  However, Lilith is only one of many aspects and Demons of this world. You will enjoy reading the book. So now I will introduce some points and do my best to explain them and what I found that Tyson as infringed upon the original writings of this book.

What I noticed is the first 100 pages were copied, Tyson turned a few sentences around, ideas but was very clear in names which I was able to look up that were clear enough to lead me to Lost Scriptures.  However, Tyson describes how Samael the Dark Lord was born as his father is the Creator of this universe and his mother is Barbelon (the Shekina) she is the feminine side of the Creator. Her light is bright and pure, but how she behaves due to jealousy towards another angel, plays a dirty trick without consent from the Divine Spirit, this is why he poisoned her womb and Samael is born as a Serpent with a lions face?

Yet in Los Scriptures, this story express’s that Barbelon impregnated herself as she wanted a reflection of her light and without consent of the Divine spirit, and because of this her womb was poisoned. This is why “SAMAEL IS THE POISION OF GOD” of course there is much more to this. I am providing one example of many Tyson has written in the book.

I have listed the link with this post, so you are welcome to download Liber Lilith yourself and the book Lost Scriptures.  Occultist today want far too much recognition and to make a living from being a writer and magician. The skill of both takes so much dedication and time which makes it rather a struggle to support yourself.

Personally I enjoyed Liber Lilith and reading Lost Scriptures, the idea of Samael and why he was born? Therefore it leads me to believe he wasn’t necessarily a fallen angel. The phrase “fallen angel” sounds like a metaphor. Lucifer the Dark Lord is the Gate Keeper to Thamuiel, the Qliphotic Tree,

Lucifer has a purpose in this world, there is a reason he rules  the earth and over sees man, he will be the one to judge man  for his convictions, when this human race ends in the next 200 years. I won’t be surprised if he turns out to the the Messiah in disguise, since he has numerous manifestations.

Tags: #Donald Tyson, #Donald Tyson Ocucltist, #Judgement of the Dark Lord, #Liber Lilith, #Lucifer the Dark Lord, #New Age Occultist, #Occultist of New Age, #The Human Race, #Tyson author of Liber Lilith
This website or its third-party tools process personal data.In case of sale of your personal information, you may opt out by using the link Do not sell my personal information.
×
Privacy & Cookies Policy