When Madoff was arrested he commented on how everything in society is a “Ponzi scheme”. He’s right it is, but greed gets the best of people. Yet the only ones who get away with greed are the elites, and that is because the common people are stupid to understand their corruption.  People in the FALSE Government and Corporations are controlling the wealth in the world and controlling our lives at best. Any and all-white racist FREEMASON COCKSUCKERS who are part of the “Committee of 300” are guilty of these actions of GREED!! Mirella Flores Commits Fraud Lies and Steals Monies from Work Vouchers. Mirella Flores lied to me about being a State Employee and Working for Workers Comp.

I recently found this out only because I was brushing up on a blog post and searching for Mirella Flores’s name on the net and found this the court doc. I couldn’t believe it and was so happy to know this cunt got busted for Fraud. Mirella Flores was the bitch who contacted me at the time I was suing Bristol Farms during a work comp case. She gave me the impression she got my information from my attorney but it was never confirmed. My shitty attorney would not communicate to me at all or let know this could happen!

I wish I had a photo of Mirella Flores, but here is a photo of her accomplice Salvador Franco. This guy was busted along with Flores with the stealing of work comp vouchers. They both had over 30 counts of fraud. Would I love to talk shit to that fat bitch Flores now? She really should have had more counts of fraud considering how long she was doing this for. 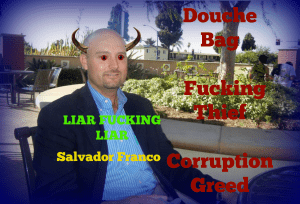 This bitch had the nerve to call me up one day and start shooting her mouth off about why I am not going to this school? Wow, I yelled at her back and hung up the phone, I had no idea all along she is stealing money from students with work vouchers which no one ever benefited from. Now I know why she was harassing me.

Moments like this make life worth living. I’m glad she was busted. I don’t know how much Colleen Pratt previous attorney mighty have known about this, but I do know Mirella Flores and Councilman Salvador Franco won’t be holding any sufficient job positions for a long long time. Hell, they’ll be lucky if McDonald’s gives them a job cleaning the toilets. Another thief.

Mirella Flores Commits Fraud Lies and Steals Monies from Work Vouchers. Mirella Flores lied to me about being a State Employee and Working for Workers Comp. Now if only Bristol Farms could get busted for all the shitty illegal violations they have committed that would really make my day!!!