Ivanka Trump is guilty of pedophilia Just like Donald Trump, when you associate yourself to these kinds of animals, your guilty by association.  Associates of Epstein in his pedophilia pimping and pandering children seem to be getting away with a lot, as cops refusing to make arrests. Why is this? Don’t cops do this, assume without evidence that a person is guilty of a crime? This is the excuse they use to detain people and questioning them with insufficient evidence. So why should any of these mother fuckers be treated any different? Your all criminals in the white house!

Hey with this Epstein’s Black Book revealed the evidence is clear to me all those in his book are very fucking guilty including Ivanka Trump and her father Donald Trump!! Their names were in his book and Donald has associated with Epstein for many many years. Only now is he lying out of his ass to cover himself as if he never knew, claiming he cut ties with Epstein years ago, sure he did.

Everyone knows Trump is a notorious liar!!  His relationship with Epstein has been aired it’s in the media, video clips and statements Trump made. He was never arrested for prostitution, which he should have been.  Trump has been guilty of so many wrongdoings. Why? Is this son of a bitch still in the fucking white house? White people are abusive pigs! Murder, Rapist and Child Molesters!!!

Ivanka trump guilty by association of pedophilia this proves you have NO MORALS, not that you ever did before. Ivanka Trump guilty of pedophilia YOU ARE VERY GUILTY!! I wouldn’t doubt it if she has fucked her father.

One thing you can always count on that “douche bag” and “murder” Donald Trump is putting his big fucken foot in his mouth like an asshole. He is really good at that and then he stupidly lies to the world. Once again a classic tale of white people and how fucked up they really are, their evil ugly side towards humanity, their corruption, their abuse conflicting on others.

Notorious, Ivanka is guilty by association and much more. You have NO MORALS, YOU or that STUPID EXCUSE OF MAN YOU CALL A FATHER! TRUMP FAMILY BURN IN HELL FOR ALL YOUR SINS OF CHILD ABUSE!!! 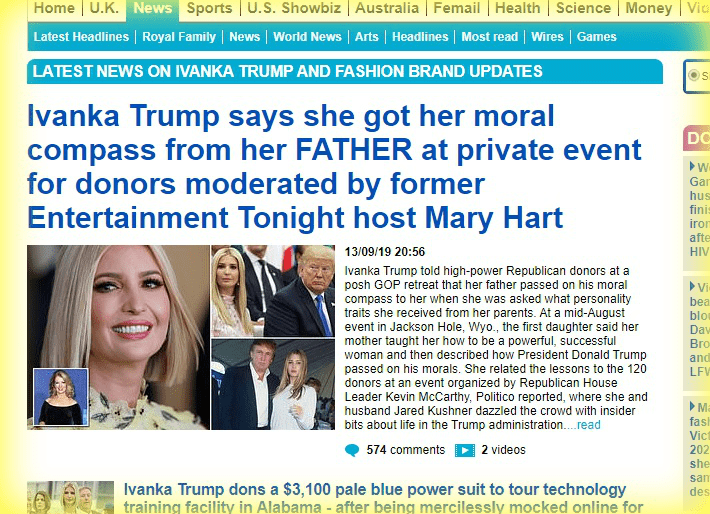 These ignorant bullshit media companies can paint a pretty picture all they want, but wake up people stop listening to the lies they tell. You think this bitch doesn’t know about the nasty shit her father has done. How many times has Donald made sexual remarks about fucking his own daughter? And this dumb bitch just laughs it off like it’s so funny. That is not a human being who has a moral compass. Your piece of shit father has NO FUCKEN MORALS AND EITHER DO YOU!!

1) You Ivanka have NO MORAL COMPASS!! If you did you wouldn’t tolerate your father’s bad behavior being a racist and ripping those kids away from their mothers. That is not a human who has morals. Now over a dozen children are dead and no one gives a flying fuck!

2) You wouldn’t laugh and think it’s funny every time he insinuates wanting to have sex with his own daughter. As for your mother, she is a joke, poor little Euro-trash who married a pimp. There is nothing powerful about your stupid mother who can’t speak proper English. Just because she made out with all that money from her father in law, doesn’t make her powerful.  She is just as guilty as the rest of you fucked up white people.

Donald Trump is a very insecure excuse of a man, who is a big loser. Donald who never worked a day in his fucked-up life. Who is a child molester, child killer, and rapist? And yet law enforcement doesn’t do a fucken thing, they sit on their ass chasing after people of color running a red light or selling weed. I’m glad to see the justice system works well for all those white people who are guilty of heinous crimes to never be punished for them.

These are just a few of the names there are several pages with many many names of people all over the world that are in Epstein’s Book, and Ghislaine Maxwell needs to be arrested!  Jeff Epstein list of Child Molesters in this Black Book  Trump is GUILTY just like his good friend Epstein!!!!   All people in the White House and Entertainment Business and Church are Guilty!  I never believed Epstein is this rich, what I do believe is it’s the TAX PAYERS MONEY USED FOR TRAFFICKING KIDS!!!