ILLUMINATION FOUNDATION IS CORRUPT, THEY DON’T DO HALF AS MUCH AS THEY SHOULD, GETTING RICH OFF THE POOR!!

Let’s talk about a subject most people are too STUPID or IGNORANT to UNDERSTAND! Housing in California. Housing in California is the hardest to obtain when you have no home. When it comes to building housing, it’s a fight because of rich developers, but it’s not that difficult because land can be acquired as everyone deserves their own home!

The intent is to kill off the human race and continue to push people out and leave people homeless and powerless. Why? The Elites and Corporations, The people who control the MONEY SYSTEM. The Elites are FALSE POWER  who enjoy killing the HUMAN RACE!!   This is why? When INFLATION RISES, it’s money being made out of AIR. Money being made out of nothing. Yet the RICH continue to get wealthy and pay NO TAXES, while the rest of us get FUCKED in a system that will break us.

Yet this money made out of NOTHING, NO ONE IS GOING TO PAY IT BACK, actually we the people will pay the price for GREED. As you see the COST OF LIVING rises, the prices, of FOOD, GAS, RENT and the COST OF LIVING will consume us, at the same time. Especially when viruses are created to kill people. The money that is created goes no place accept the politicians bank accounts and the world bank. All of us have to now support the DEBT THEY CREATED, through our jobs (paying higher costs) and taxation. Yet the taxes we pay for Medicare, SSD, FICA, we get screwed thanks to Social Secruity, EDD, and State Disability refusing to pay us.

This land the white man killed indigenous people for, was built as a nation of corporations that serve only the RICH, and we as the domestic group are the modern slaves. WeLCome to America, It’s NOT LAND OF THE FREE, but a FIGHT TO SURVIVE. Democracy doesn’t exist. Politics are as Rotten as ever and haven’t you noticed, there is no one left to run for CEO to the USA.

The more we work, the more that is taken from us in taxes, in our way of life. People are NOT living to enjoy their retirement, people have to work 2 to 3 jobs and then die by time they are 70 years old. Two things happen from this FINANCIAL ABUSE 1) People will continue to fall with loss of work and home. 2) Family doesn’t stick together to hold on to work and home, so everyone falls. 3) Leads to homelessness and some people will give up eventually. 4) The Corporations continue to pump drugs into society and this causes despair and death. 5) A cause for homelessness are fires, burning homes down, this NO ACCIDENT. Its’ intended.

Now if your chronic with mental or drug problems then you might qualify for housing, otherwise if your not FUCKED UP ENOUGH, you won’t get it.  Coco is a “housing navigator” who works for ILLUMINATION FOUNDATION, three times I ‘ve asked for help and this FAT PIG refused to do anything. She ignorantly tells me to call 211 that’s how fucken STUPID and LAZY this PIG IS! And her lame ass  excuse is “oh I am trying to help”, if I ever see this gorilla, I’m going to beat her ass hard!!

Coco lied today to a social worker about one of the transitional at 3535 Commonwealth in Fullerton.  She lied claiming no more people will be allowed to stay here. This place provides, housing vouchers medical, dental and many other services to help people. Now, Illumination can house people, they own real estate, the can place people in motels with a voucher, they have tons of money from those same rich assholes who push us out.  And some of the rich who feel guilty so they help the poor, but they refuse to do so if you ask.  They will jerk you around to go through hoops. 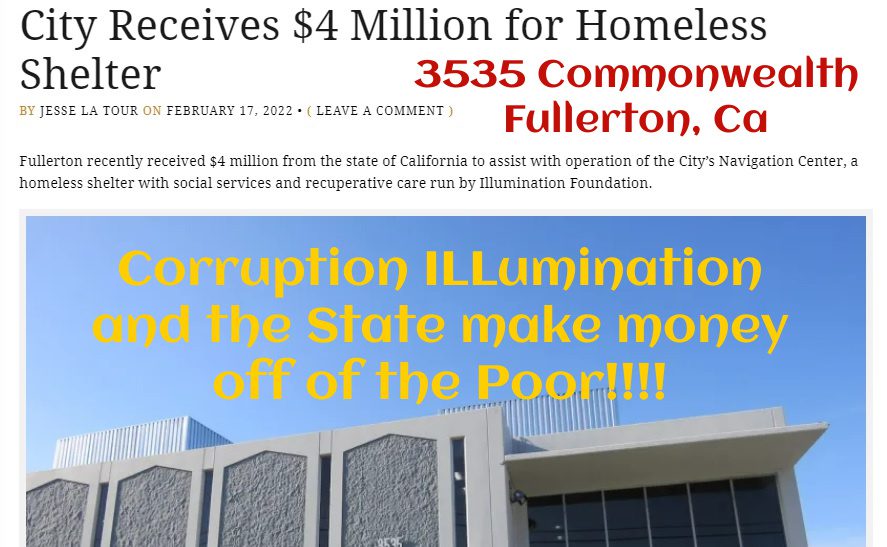 How I came to know of the place on Commonwealth is because I briefly stayed here through St. Vincent DePaul, whom is linked here. A very young white girl named Angela is the director whom has a negative attitude.  That cunt refused to look me in the face. It’s always a WHITE PERSON who works these places. This is the interesting part that is obvious to me, organizations and church’s make so much money off the poor and yet, they claim they help so much. First of all St. Vincent DePaul is a large organization through the Catholic Church. Of course they have money, who do you think they get it from?

Take a look at this ad, it says STATE OF CALIFORNIA gave this money, really? Yet the state can’t just provide a decent home for people to live individually? Of course they can, they don’t want to. 4 MILLION can house thousands of people. It’s best to keep everyone on dope and at the mercy of the State and the Church, because they are the real DEVIL when it comes to living your life under the THUMB of the State. I think Al Pacino in Scar Face is very much misunderstood. Capitalism is getting FUCKED!!! And people like Coco is apart of the problem, not the solution. I pray that FAT PIG loses everything and ends up on the street, strung out!!!

Let me describe another deception that is plaguing millions of people all over the country. Unemployment and Disability, they don’t want to pay out all those people who have worked their ass off into this FRAUD SYSTEM we all live under and give them the money they are entitled to have. I know I was fucked and denied, last year I made 60,000 and EDD fucked me and refuses to give me my money. This is why TAXES ARE FUCKEN TAKEN FROM MY CHECK, FICA, SSD, MED, this is something all people have to pay and it collects interests, from the age you start working. Including the immigrants who never are apart of the filing system. Yet this fucked up country and all across the globe are in DEBT, THEN STOPPING PISSNG AWAY THE MONEY ASSHOLES!!!!

St.Vincent DePaul has a volunteer named Bob, who works for the church like so many other old white people in Orange County do, because they are retired and bored at home. This place is in Fullerton, Ca providing resources and stale food.  The church placed me at this transitional after my man Todd died. My emotions were so fucked up I lost all we had. I wasn’t given any help with case management, but left after two weeks because women were getting COVID inside the facility. So I left,

Weeks later I spoke with Bob, because he insisted he paid my rent. I was like where?  I don’t recall that.  Bob tells me how they paid my rent to stay at this transitional. These places are free, so why would you? Then he lied and said, oh we don’t pay rent for those places, but we have you marked down as paying your rent.  Bob your a FUCKEN LYING DOUCHEBAG!!! So I will be contacting St. Vincent DePaul, who is in charge of these volunteers and reporting this live, because they are lying to me. Transitional are FREE, so if your giving money claiming its my rent to stay there and pulling this shit, then I will go public with this corruption!!!

Frankly, I believe all of them financially wash each other hands.  These volunteers are so fucken dishonest themselves. These white people are so racists and act like everything they do is a favor. Let’s not forget how the white man killed indigenous people in OC and LA BASIN.  Yet any white person will deny this ever happened.  The Yorba’s  had this problem when a white man marries a Mexican Women to steal the land and take over which he did. Marrying into wealth only to steal. I will not bow down to anyone just because some organization financially provided a couple of hundred dollars of assistance.

Fuck it, maybe I will just start selling BLOW JOBS, at least I won’t be a fucken slave.  There is no excuse for people in this country to not have what they are entitled too.

In this world, this land all over the globe was created for people to live freely, we can live off the land. The dirt can be used to make a home, even the wood from the trees, the fruits naturally growing from the trees to eat and fresh water that can be found all over the world to drink. Man can live and have all the abundance every human deserves to have, a home, food and work if they choose. People in biblical times didn’t have jobs with unions or viruses to kill off the human race, but slavery has always been a problem.  Slavery has always existed since man has understood how to create a monetary system that will only serve one group of people and its not most of us. Most of will die before our time. Greed is the New Drug!

All I have to say, for all those young people and divorced 30 something, living with mom and dad, enjoy the FREE RIDE while you got it, because it won’t last. Especially if you work a shit job, crappy minimum wage has always existed, this is why it’s called a JOB ? JUST OVER BROKE!!! See the white man thinks of everything, doesn’t he? Rent is $1600 to 2500 for an apartment, clean record and 3 to 6 times the income. I hope all of you can afford it in California. Once your on your own, your going to see how ugly it’s going to be trying to survive, just don’t have kids, it won’t get better. Wise up and DON’T GIVE UP!

Tags: #Corporations are Stealing from Consumers, #Elites are Killing the Human Race, #Fullerton Police are Hostile and Abusive, #ILLUMINATION FOUNDATION, #ILLumination makes money off of the Poor, #Orange County California, #Orange County Residents are without Homes to Live
This website or its third-party tools process personal data.In case of sale of your personal information, you may opt out by using the link Do not sell my personal information.
×
Privacy & Cookies Policy