Horse Shit at the Redline | Racist White LA Cops allow the Horse to Shit all over the entrance of the Westlake Train in downtown Los Angeles. Every day in life there’s a number of crap people put up with being subjected to and imposed upon from family, friend’s, co-workers and everyday strangers we cross coming and going. Why? Is it because people are just miserable with themselves and enjoy making others miserable, or is it ignorance, stupidity, racist attitudes or just plain being a fucken asshole because it suits their personality. 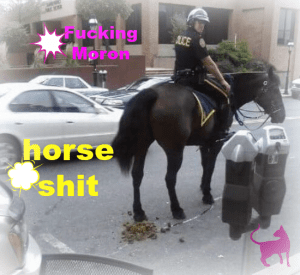 Taking public transportation such as the trains and buses a person cross’s all walks of life and it can be tiresome and other times it’s not so bad. This past week I was leaving Los Angeles into the valley and as I stopped at the North Hollywood station and noticed there were two LAPD officers on horses. Horses Shitting at the Red Line Entrance

At the moment they were just standing there near the entrance as one cop was holding both reins of the horses and the other cop was preparing himself for a chore he was not too thrilled about having to do; as the horses were defecating all over the sidewalk. How these cops even got to the North Hollywood station with these animals is beyond me, since they’re LAPD. However, I did recognize one of the officers from a central part of Los Angeles seeing him before riding that same horse a few months back. White Racist Cop Talks Shit No Manners

I personally being a horse lover as I think they’re beautiful animals decided to walk up to the officer and ask him if I could pet his friend? He said he didn’t mind but then continued to express a derogatory statement using a neutral sounding voice by stating, “there is a charge to petting his horse”. I would have to pick up the “horseshit”. I stood there looking at him and just realized his mother gave birth to low life degrading fucken asshole who has no manners at all. Is it any wonder why cops get no respect from the public? Maybe it could be because they have no respect for people in general.

Yet I strongly believe if I were some white bitch with blonde hair and blue eyes looking like a fucken barbie doll, he may have been nice to me, maybe even kissing my ass. This utter fucken moron really should realize these animals could initiate conversation as way of meeting women, (not necessarily me) as I wasn’t the only woman walking up to him, but instead, he rather present a low life degrading character by speaking to me like an asshole with an ignorant statement such as that. The only thing I have to say to the Los Angeles Police Department is, “you two faggots are capable of picking up your own horseshit”!!! Pick Up the Shit You Stupid Cop

Next time trying pulling your head out of your ass and take these animals and park them elsewhere not near the red line train.  They shit all over the sidewalk where people are needing to access the entrance to the train and vendors are selling food, you fucken morons!!

Mid Life Change Is About Identity