Hollywood Scam Artist Mario and Merida Romero Stealing Other’s Property. Watch out for this couple. Mario lies about having cancer, he doesn’t have Cancer, he wants to steal your property. Scam Artist are born everyday and they usually get away with murder, until someone tracks them down and gets even. Mario and Merida Romero are two scam real estate artist who find vulnerable and hard working people to steal from. Mario uses his “I got cancer story”, to lure people in to feel sorry for him. He basically convinces people to do business with him and steals any monies he can squeeze including real estate property. It’s been discovered Brian Terry a real estate broker ( License Number(s): #00929855) is working with Mario helping to scam people out of their property.

Here is one mans story:

My name is Todd Taylor and my father was Wayne Taylor who died before this horrible event took place. Let me share my story of what happened. A man named Mario & his wife Merida Romero approached me during a vulnerable time in my life. No one was there for me, not even my sisters Tina and Lisa or my mom, but they never were even when I was growing up.

During this time I was just released from prison, my father had died and I was alone. I wanted to sell the only property I had inherited and this man Mario and his family lied and swindled me out of my property. Let me just name all parties involved. Mario and Merdia Romero, his anut Nellie and her husband Robert Hoffman, they also have a friend named Bernadette, she is the one who stole the deed to the house. Bernadette convinced me to hand the deed over to my property at 8675 Appian Way in the Hollywood Hills. (Don’t know her last name she is a tight friend of Nellie Hoffman).

It was a home my father purchased 30 years prior to his death. See I was in a very bad place, my father was a drug dealer he bought this home because it was a prime location to the actors and entertainment business. Whom most were his clients for many, many years. This property was notorious for actors and musician’s buying drugs from Wayne Taylor. This is why he placed himself in this neighborhood being in a prime location in the Hollywood Hills it was good for business and he did this for over 30 years. His clients were actors during 60 and throughout the 90’s. Long story short we lived there over 30 years and my life was in a very dark place by the time he died. I wasn’t thinking clearly at all, so Bernadette who was a friend of Nelly’s swindled me out of the deed (because the house was paid for). Soon after, Mario was manipulating me the house wasn’t worth the value you see it listed at 450,000.

The house never sold for that much, never (the paper work was a lie).  All of them cheated me and only gave me less than 20,000 for the property. I won’t deny the house was in very bad shape, regardless, the property is valuable. Mario first approached me, then later pushed me to move out. I moved to Orange grove in West Hollywood. One day Bernadette shows up at my house unexpectedly, convincing me it would be best if she held on to the deed to the house.

I never met her before and I know now that Mario and Nellie put her up to it. Nine years later I find out Mario is stuck because the reality is he can’t sell the property. The lot is empty, because Nelly who gave the money to Mario to buy the house, can’t afford to rebuild a new house after having knock down the old house. Its incredibly expensive so now he was waiting, hoping someone will bail him out of this situation. Waiting to make him a deal or go into helping him rebuild. 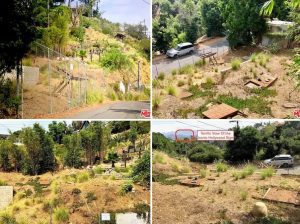 Either way nobody wants this vacant lot. I know Mario can’t afford it, his aunt Nelly bitched and complained to me how expensive the castings were that have to be placed into the ground just to lay the foundation down. He uses the excuse about getting Cancer this is why the property has been sitting so long. This fucking asshole is fine he has a speech problem and had a box in his vocal cords for years even when I knew him. He doesn’t have cancer, he just wants people to feel sorry for him so he can swindle someone new to get him out for the hole he dug himself into.

These people still owe me over 300,000 dollars. I had a real estate broker and she sided with them and she ripped me as well. I wish I could remember her name. So don’t let him fool you or cheat you with the Cancer story, if you find yourself wanting to make a deal with him, just watch out. He is a f*cking liar and thief. His Aunt Nelly, his wife, their friend Bernadette. By the way Nelly owed me a lot of money and refused to pay me because Bernadette had the deed, that was her excuse. Do not trust this broker named “Brian Terry” (#00929855). He is a part of the scam and still working with Mario and his wife. You can find him on Google. 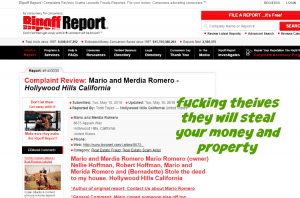 As for Nellie she knew all along Bernadette manipulated me out of the deed. I never signed any papers, never closed the deal. I believe they forged my name on documents of ownership. I realized it all to late it was all a set up from the start, all of it. They stole my house and now their stuck with a lemon. I guess the got what they deserve!!!! That’s what happens when your a crook. Just so everybody knows if you plan on buying this land or doing business with Mario and his aunt Nellie, be mindful of the bad elements that are soiled on this land.

I wasn’t kidding when I said my father was big time drug dealer and with that comes many horrible things that happened in that house. Nothing good will ever come from any of it. The land is soiled, even if you build a beautiful new home, I truly believe evil resides on this property. All I can say is I am now in a better place far and away from 8675 Appian Way. I thank God for it.