Evil is to Live, but for whom? Not people of the world, only the aristocrats, the elites. The Iron Men who have planted their seed of Evil to destroy the human race.

Have you ever noticed how much “evil” is in the world and among all of us that it seems so natural? Mass media is the prime problem to translate all the crap that is expressed from “Iron Men” who believe in their own diluted minds they are above everyone.  People, we all live in a society that is make believe, its made up, fake, it only seems like it all matters, it doesn’t. As many more people are going to realize how much control these Iron Men have over us. 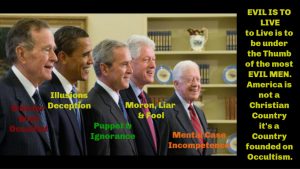 It’s like being in a domestic abusive relationship, the other spouse is dominate and uses your weakness against you, manipulating your every emotion, this is how the U.S Gov plays on us as humans. Yet they are the “evil” ones with their greed and false pride. Their ambitions of believing their greater than anything else and killing people to rise to the top. Now this may not be the best analogy, but a man (or wife) who kills their partner does it because they are not in control of their feelings and mental state of mind. They murder their partner because of their insecurity and anger to be dominating.

Just as Trump killed those children he took from their mothers, no one speaks about it anymore. No one cares, yet if these children were all white kids maybe then someone might have said something. The message here is “life doesn’t matter” killing children who are innocent is the worst thing Trump and the Vatican Church have done. They will severely pay for those crimes. Their “evil” will NOT be forgotten. I guess we all should have seen this coming (the virus I mean). These Iron Men always have something cooking to exploit and eliminate the human race.

I will say, when they stand up and speak its because they are bragging about what they intend to do to us, not to protect us. Don’t be a fool listen to what and how they speak. Evil is to Live, but for whom? Not people of the world, only the aristocrats, the elites. The Iron Men who have planted their seed of Evil to destroy the human race.

The next big push will be to LIE and say we have to be vaccinated. It will be necessary because of the virus. NO…

it’s not, the VACCINATION will be to kill more people and so they can track how many people they have planted the virus in.

If you allow these mother fuckers to manipulate you with a VACCINATION, you will die. Remember its all manipulation and lies.

Tags: evil among the church, evil is in man, life doesn't matter, murder of children, the elites, the vatican, virus to kill the human race
error: Content is protected !!