Elizabeth Holmes Commits Fraud and Embezzlement – Understand she Needs to be Famous and Popular this is why she is now a Victim of her own Demise. I wouldn’t feel sorry for this white cunt, she is a liar and a thief, but we all know the judge will be the douche bag and dishonest asshole to set her free. No Jail time for her because she is white bitch and came from a good family, so she claims. 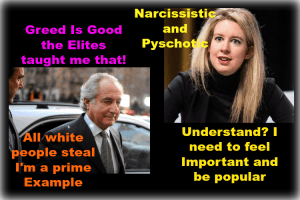 Secondly, The system doesn’t lock up bitches like this. Hell even Martha Stewart had a slap on the wrist and everyone glamorized it. Nice white people they just can’t help themselves with the crimes they commit.  It’s only people of color who pay the price for these mother fucken white people who get away with murder!

I wonder who dropped the dime? Someone had to have ratted her out of what she was doing. The media lies so much it’s hard to know what is true and what is not, but either way she committed fraud with a product that couldn’t sell. 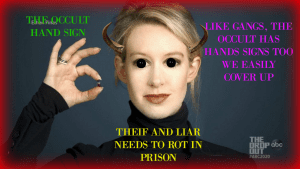 OCCULTISM IS WHAT GAVE ME THE MONEY AND FAME I NEEDED!!! ELIZABETH HOLMES CLAIMS SHE CAN’T PAY HER BILLS OR LAWYERS

ABC reported this about her lawyers, which I find to be so stupid. Lawyers are ready made whores who demand money up front and now they want to withdraw from her because she hasn’t paid them. These people are fucking stupid, why didn’t they demand payment from the start?  This white bitch has probably hid all the money she stole and now acts like she has no money to pay her bills.  People were giving her millions and millions of dollars.

In papers filed with the U.S. District Court of Arizona on Sept. 30, 2019, the law firm Cooley LLP has requested to “withdraw as counsel of record for Elizabeth Holmes,” adding, “given Ms. Holmes’s current financial situation Cooley has no expectation that Ms. Holmes will ever pay it for its services as her counsel.”

Separately, Holmes and Balwani are awaiting a criminal trial set to begin Aug. 4, 2020, in the U.S. District Court in San Jose, California. Both have pleaded not guilty to 11 counts of wire fraud and conspiracy to commit wire fraud. If convicted, both Holmes and Balwani could face 20 years in prison (YEACH FUCKEN RIGHT)  THESE MOTHER FUCKEERS NEVER DO A DAY!!!   And a fine of $250,000 for each count of wire fraud and each conspiracy count. Now they are going to drag this shit out while this bitch sits free as a bird covering her ass and figuring out how to get out of this mess she got herself into. 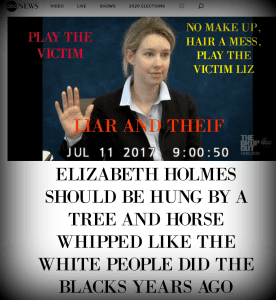 Why not let her sit in jail?  She should sit in jail for being a fucken thief. She is wasting the taxpayers money so let her rot in jail, she deserves it. If she were BLACK OR MEXICAN NO PROBLEM SHE WOULD BE IN JAIL…I PRAY SHE BURNS IN HELL!!!

PLAYING THE VICTIM, PLEASE FEEL PITTY ON ME. I CAN’T HELP MYSELF BEING A LIAR AND THIEF.  Found Guilty, throw the Bitch in Prison!!!

IT’S IN ME NATURE:-) THIS CUNT NEEDS TO BE BEATEN TO DEATH, SHE IS A LIAR AND A FRAUD.  YOU KNOW WHITE PEOPLE FUCKED UP ASSHOLES WHO LIE AND STEAL, CHILD MOLESTERS, WHITE COLLAR CRIMINALS, WHO ARE FUCKEN GREEDY PIGS!!!

YOU WHITE PEOPLE ARE THE PROBLEM TO SOCIETY ALL OF YOU. YOUR CRIMINALS OF THE SYSTEM, YOUR ABUSERS WITH A SLAVERY MENTALITY AND YOU DESERVE NOTHING BUT DEATH. YOUR RACIST ASSHOLES WHO LIE AND STEAL FROM PEOPLE AND LIE TO COVER YOUR ASS, BELEIVING YOU WILL WALK FREE!