East Valley Vocational School is the Worst of Educations.

East Valley Vocational School is not worth attending. I reconsidered my options of education, since a university has it pros and cons and racist attitudes, the process alone is ridiculous with essays and references, not to mention costs. So I decided to try something different. I attended a vocational school called, “East Valley ROP”.  Starting off was a real hassle I had to go to the unemployment several times for orientation and paper work. A program I found paid for it, but this school was definitely not worth attending. East Valley Vocational School is the Worst of Educations

One thing I am certain of, the “online experience” for education works for me regardless of what your learning. Its conducive, its effective and you don’t have to deal with the ignorance of poor teachers and students who bring their personal problems into the class room. Online doesn’t work for many because they lack self-discipline. One advantage is you can create your own study habits, which as you may realize no one ever teaches this to children. Another advantage is arranging your own schedule. So if you can structure good study habits and a disciplined schedule for yourself, you’ll do just fine. This will help to avoid all the bullshit, over priced universities and vocational schools like EVROP.

Considering the administrators only care about is how much money they suck out of you. East Valley Vocational School is the Worst of Educations and you feel like your in prison, since they have chain fencing all around the school, no decent cafeteria and your under surveillance. Its a horrible atmosphere.

I forget to mention, I had to wait a week for my books and supplies, which there is no excuse for this, the school knows exactly how many students are going to attend in a class. The supply and demand doesn’t exist. Frankly I believe they order the books and supplies deliberately late. There is only one class for CNA its not like they have several going on at the same time.

When I first signed up I was dealing with some young girl in the office who was unprofessional and immature I can’t stand that, she wouldn’t answer my questions or explain the details of the program. Gross Incompetence, which lacks with so many people. Even the employees who are supposed to assist the students lack in knowledge.

Since there is no decent cafeteria you had to bring your own lunch. You had two 15 minute breaks and a 30 minute lunch, class was over by 2:30 – 3:00pm. Graduation rate is about 51%, which is very low. This place really needs help. 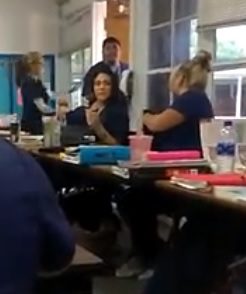 The really awful part about this program at this location there is only one teacher for CNA program, so you can’t choose and pick someone who is a good match for teaching the curriculum. First I had an Asian man teach me CPR, then the rest of the six weeks I had the most annoying instructor. Students (Bridgette & Friends) were kissing her ass and bribing her with, cash GC, presents  and candy so she would favor them and pass them in class. Bridgette who decided to be the “rat” and teacher’s pet, telling the teacher I was filming the class, which I don’t give a shit. She was one of the students bribing the teacher the most. Bridgette was a young girl whose only attempt in life was to have two kids and be a single mom, but her behavior set the stage for acting out as if she were better than anyone else. Bridgette continuously bribed this teacher with gifts, flowers, CASH and candy. First let me describe some poor habits of students who go here.

Some of the students were nice and others were extremely annoying. One day I was eating lunch minding my own business and this white guy named Doug felt the need to bother me with his problems of being divorced. I am so sick of white people dumping their shit on people of color. He was a real nuisance always talking in class about something trying to impress people as if he was so intelligent. Hanging out with the women so he had a shoulder to cry on and wanting that need of approval from others. 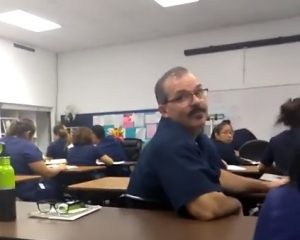 Of course many people refused to acknowledge their back ground check as if it items wouldn’t surface. A DUI or any pending traffic violations or other arrests after being finger printed, it does come up, YOU won’t be certified, so why attend?  A handful of students had this problem and continued on with everything knowing they weren’t going to be certified. Its a state exam and state back check and with finger printing they will see everything on your record. Its a waste of time to go through all that if you know you have something on your record. Hell even stupid “Door Dash” doesn’t let you work for them if you have a ticket. And your only a contractor, not an employee and you have to use your own fucking car. Again why bother?  If something is current and pending it won’t be approved!

Now the teacher every morning showed up about 7:30, so I was able to get in early however, it didn’t take long for the class to fill up and create about 30 minutes of talking and loud noise. Its interesting how people being adults can’t just go into an area without being disrespectful and refuse to keep the noise level down. You would think they were a bunch of 16 year old kids. When the class was quiet during a quiz or test, this teacher would turn on her computer, the volume was extremely loud. I guess common sense doesn’t resonate with her. A major disturbance.  This was my favorite part her pulling the film screen up as it rattled and made another loud disturbance. She would tell everyone to quiet down during the test and yet she is the one making all this racket, this happened daily.

She also had the habit of discussing people’s grades out loud especially after we took an exam. I guess she felt the need to let others know whether you passed or failed a test. Be respectful of one’s privacy was not of concern to her.  It was more like putting you blast. This is something an ignorant 5th grade teacher would do. Her ongoing behavior was unacceptable. She would bad mouth students who left the program and discuss to the rest of the class, why the left? That is NO ONES BUSINESS, but frankly VIVIAN enjoyed it, she’s  A CUNT!

Vivian Arteaga is the only teacher for the CNA program. The school is to cheap to hire other people. Its overlooked and no one cares. Like I said before you can read the books and teach yourself. There are YTube Videos for CNA online to learn the skills. Regardless of what state you’re in, the basics are the same. You only need to know policy of the hospital when working in other states.

I ended this with telling these ignorant morons off and walking out, again they don’t care they just want money! Of course the administrators never bothered speaking to me, because they are just to important. They pass the buck to some stiff asshole who thinks he can tell me I’m the one who is subordinate. The only reason I was filming the class was to show the staff how the students are continuously disruptive when others are taking an exam and trying to learn. Since the teacher had a habit of walking out of class through out the day she was not controlling the environment.

As for the students practicing the skills at school, it was not thorough and enough time for “hands on” practice. You were lucky if you got a full 30 minutes in without being interrupted. With all of this between the teacher and bad students, you can see who was more or less going to fail. Vivian Arteaga SHOULD BE FIRED!!!!  NO TEACHER SHOULD BE ACCEPTING BRIBES!!!! 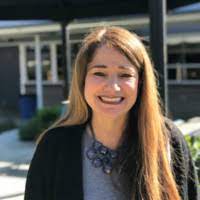 During the skills exam you only have 1 chance but can retake the test at a later time at your own expense. You will be tested in 5 categories and you could be asked any number of questions from the boards. This is why its best to get the skills down, the academics are not that difficult.

Overall my advice goes straight to the American Red Cross, this program is a lot less expensive, better teachers and various times. It’s a professional setting and you’re not confined to one class and or one teacher. Find a way to take it online, in a hybrid setting. Going to this vocational school was the worst experience outside of Cal State Northridge. Now if you choose to work in this field you don’t  need a CNA certification, but it’s nice to have it. Its the foundation of starting a nursing career.

Work as a Care Provider

You can do home care for IHSS with any Dept of Social Services it’s not much money, about $15.00 an hour but you can get registered with the state and gain full-time employment while attending courses. You just need to find your own clients.  In addition you can have several clients and work 70 hours per week which is $5000 per month. It’s what I do, you can have one client or several clients and still work that much. Its better than a CNA job.  If you live with the client, you can exempt federal taxes and bring home about $4850 a mos after state taxes are deducted.

East Valley Vocational School is the Worst of Educations. Don’t waste your time with this school which is located in West Covina, California. The teacher is Vivian Arteaga.  This school will not help you gain employment, you will have to do that yourself, but they have some limited resources on campus. One thing about this location, it feels like your in prison. The entire area has chain fencing around it keeping all gates locked. You have to walk all the way around the front entrance. It makes the entire school look tacky as if your incarcerated. Maybe it’s the intention to create the feeling of being incarcerated. There are plenty of other options with a professional atmosphere and teachers who have ethics and manners.