Dump Trump Crook the world doesn’t Need Another Moron for President Its time to get rid of this motherfucker, he is a fucking pimp! Since the beginning of Trump’s so-called, “let me be president” campaign, my first thoughts were if this fucking moron is elected to run this country that has been collapsing for years I will be on the first plane as far as Australia to get out before America sinks any further.

Are you fu*king serious?  It was expressed from a news media commentator how Trump doesn’t care what people think of him hey, good for you, but the problem is Trump you’re just a racist fuck who is a sexist pig. You know nothing about people or running a country, your not going to make America Great again!  You’re going to run this country so far into the ground, no one will be able to crawl out of it. I don’t need to read his racist comments on immigration I can only imagine the ignorance coming out of his mouth.  I will simply point out, the American Government makes money from immigration this is what American is based on people. Why else do we have so many people such as Russians, Armenians, Polish, European trash who enter into this country and never leave.  This idiot is married to an immigrant:-) 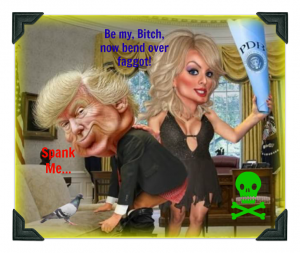 Yet he has the nerve to pick on the Mexican people as if this entire culture is the problem to this country that is falling into the sand due to these greedy slobs like Trump. YEAH… well the Mexican people aren’t trying to “fuck their own daughter”. If any people belong here it is the indigenous people, it is the Mexican people. Now don’t get me wrong everyone deserves a good life, a better life, these scandalous politicians have seriously fu*ked American’s in the ass with their greed, the corruption, the wars, the lies, the killing of people. Let’s not forget this asshole “paying for prostitution”.

Let me just explain that the Mexican people don’t have the kind of money the Government wants to take form them, so they may enter into the country. 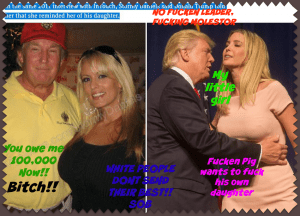 Like the Armenians do, and Russians who are only criminals anyway. There are thousands of Europeans here that not citizens. Yet the media and this false Government love to slander the Mexican people as if their the criminals and the problem to society. When in fact it’s because of this false U.S Government who has destroyed people’s lives, by raping and killing and creating a war in these backyard countries, just so they could steal their resources and land and kill people. The majority of true criminals are WHITE!!!

The Chinese do the same thing for the most part. This is a common factor among so many this is why immigration exists it’s not due to one fucking race of Mexican’s trying to cross the fucken border Trump!! I’m so sick of all you assholes out there exploiting the Mexican people if anyone has a right to cross over they do. White men like you seem to naturally think this land is yours by birthright.  It’s not you ASSHOLE!!! Since this is the subject of immigration maybe you as a white man who is not a natural citizen should go back to where you came from. Let’s not forget to take your fu*ken immigrant wife with you and drop her sorry ass off at the same time she barely speaks proper English.

Everything about Trump is a manifested lying.  He is so gross while commenting derogatory statements on women, do you really think women think you’re sexy or good looking? Take a hot shit look at your own ass in the mirror, being naked I doubt you’re going to win some noble prize.  You’re a joke and you look like a flaccid clown, you should care everyone is laughing at you. You will not win the presidential campaign so stop trying to bribe other candidates with money donations.

You’re just a shallow sad insecure male with probably a tiny dick!! I wouldn’t be surprised if it’s true considering you need to prove yourself having too many kids from younger women old enough to be your own kid (daughter).  How sad for you to buy these women, because in reality you know they wouldn’t give you the time of day if you were broke.  Like Rosie O Donnell once said you are just a “pimp”.  You’re not going to win, and if you do, it won’t end well.