ABUSE IN THE WORK ENVIRONMENT:
Domestic Violence and Abuse takes many shapes and forms, verbal abuse, emotional abuse, physical and psychological. It’s everywhere in our society. My theory on white people within the human race is they are the most abusive race crawling on our plant. The ignorance and stupidity of their parents and family member’s feeds their off spring the same delusional garbage, recycling abuse. Too many white people in higher positions usually are the predators of an abusive work environment. Just to name names, Harvey Weinstein movie director who was arrested on rape and molestation charges, now facing prison. Though many people looked the other way until only one person reported his ass to the police.

Teena Perez and Laura McNeil from PIH HOSPITAL threaten to physically hurt me during my shift working at PIH. All because of another workers lies (ROBERTA THE PIG). Sexual harassment from managers at Bristol Farms is another form of abuse with on going racism and sexual harassment. Parents Pimping out their daughters as parents did in the Jeffery Epstein case. Michael Jackson’s case is another example of abuse as his father inflicted abuse on his children, the cycle repeated itself. Trump and his entire family including the Vatican abusing and killing children after they were taken from their mothers. Speaking of the Vatican how many times have these sick demented priests who refer to themselves as a vessel of GOD! Are molesting boys of all ages and law enforcement refuses to arrest them? Too dam many and cops do nothing!!

I personally have had white females, mock me, laugh in my face, put me down and all were in the environments of work, college, job interviews, college work shops, home and people in everyday society. White Women are the biggest problem and so are white men who are the most abusive predators. Their is much domestic violence and poverty in white families.

ABUSE IN SOCIETY:
Abuse many times will lead to murder as it has in cases involving white females. Casey Lee Anthony was acquitted after murdering her daughter. What I found bothersome is ALL the sick twisted FUCKS who actually lied about being the father and the man now who supports her and allows her to live in his house. ALL the STUPID ASS WHITE PEOPLE SENDING THIS BITCH MONEY while she was in jail. If this CUNT was black or Mexican no one would have sent money. CASEY LEE ANTHONY MURDERED HER CHILD!!!!

Andrea Yates, ANOTHER WHITE FEMALE who killed all of her offspring and told the court “the DEVIL” made me do it. Her husband new she unstable and still kept her barefoot and pregnant. Unstable not with mental illness, that was the crutch, excuse to get acquitted for murdering all five of her children. Unstable meaning she didn’t want the responsibility of being a mother at home all day with five kids. She may have been overwhelmed and hating her life, so yeah maybe those DEMONS were fucking with her. Either way she murder all five children that is a case you can’t just acquit, too many kids to account for. She is in prison for life.

Now the latest an IGNORANT STUPID FUCKEN JUDGE who was definitely PAID OFF CASH (BRIBES)  BY PARENTS!! To allow this WHITE BITCH to go home instead of going to prison. Skyler Richards MURDERED her baby. Instead of going to the clinic with a proper procedure of abortion. She enjoyed murdering that baby. Skyler you are NOT FOREVER SORRY. I will pray the demons of HELL torture you personally for the rest of your life with uneasy and agony of never resting. Torture your mind of guilt and nightmares, as you deserve it. The JUDGE WAS WRONG!! YOU DESERVE SEVERE PRISON TIME, NOT FUCKING PROBATION BITCH!!!! Let me just point something out, how would the judge know she went out partying like he mentioned? If someone wasn’t personally informing him? The judge was bribed, this is why Skyler only got probation, but Mexicans are getting 2nd strikes for drug possession and non-violent crimes? FUCK YOU WHITE PEOPLE!!! 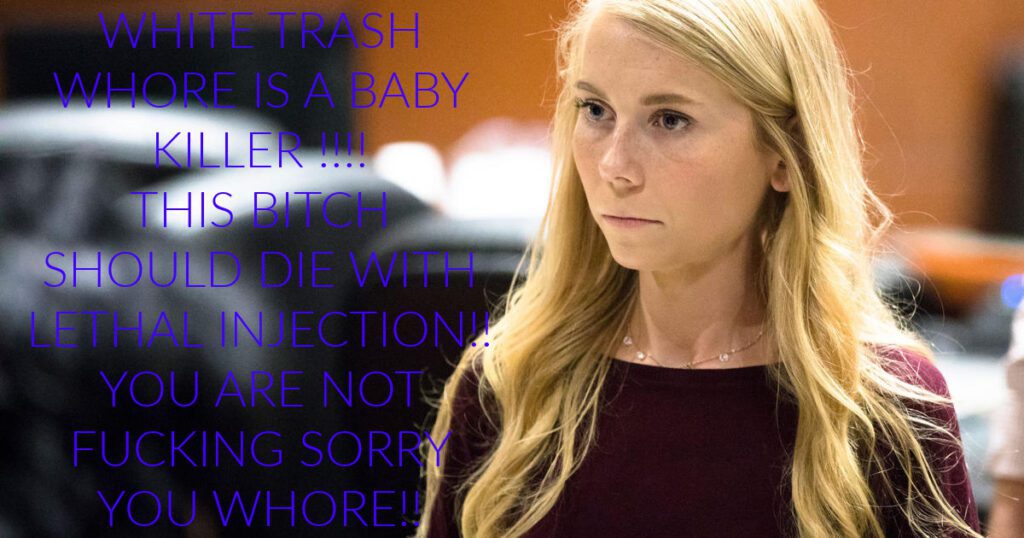 YOUR NOT SORRY BITCH AND YOUR NOT NORMAL, YOUR FUCKEN BABY KILLER, YOU DESERVE NOTHING, SHIT DEATH….

My Personal message to DAILY NEWS FUCK YOU MORONS. Don’t speak for this white trash murder, that bitch feels NO REMORSE!!

BOTH OF MY GRANDMOTHER’S HAD 10 KIDS A PIECE, THEY MAY HAVE BEEN FRUSTRATED AT  TIMES, BUT THEY NEVER MURDER THEY’RE KIDS!! AND YOU FUCKED UP WHITE PEOPLE ACTUALLY THINK IN YOUR FUCKED UP MINDS YOUR BETTER? HEY TRUMP!!! THEY WHITE RACE IS NOT SENDING THEIR BEST ASSHOLE!!!! ELIMINATE THE WHITE RACE!!!!!!!

DOMESTIC ABUSE IN FAMILIES:
Donna, was a friend years ago, whom I lost track of. Our kids went to the same school. Her husband was a “tweeker” on speed. Donna’s situation was the worst I had seen, as her daily beatings were a ritual. I would assume she either has to be dead or in the mental hospital. The first time I saw her husband he had a wild look in his eye, of sociopath, and a violent person. I sensed it. I begged Donna to let me take her and the kids away to a women’s safe house, but she wouldn’t leave. She suffered with severe depression and so did the kids.

My neighbor Joyce was beaten daily by her husband John. It took her a long time to finally leave, but she did. After that she only dated black men. A classmate I knew told me her mother forced her to marry the first guy she had sex with. He kicked her ass a few times and tried to get her pregnant, but she was smart not to let that happen and finally left.

An ex-boyfriend of  mine told me his father’s wives and girlfriends sexually abused him all the time. Todd was exposed to the movie industry very young and actor “Roscoe Lee Browne” chased after him, but never caught him. Another time this white kid from a rock band kissed him on the mouth and Todd beat the shit out of him.

I had two best friends all through school, but Robert Acosta thought it was okay to molest one of the two friends. This broke our relationship, he is now dead, but how many times has the man been a predator to under age girls? 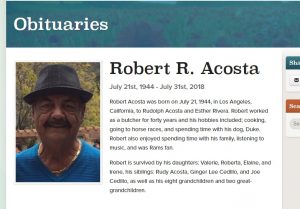 I only wish now I could throw it, in Linda Acosta’s ugly face being the snotty two face bitch she is. She was my friends mother, and her snotty daughter Roberta Acosta was an exact replica of her bitch of a mother. And I am being kind when I say this, Roberta was a horrible person, she is the sister to the other high school friend I once had.

Another horrible example is another Acosta Family. Tom Acosta who is responsible for the death of all his sons, except Michael Acosta who is still alive. Tom Acosta married Sylvia Acosta and they lived and might still on Denley in Hacienda Heights. He physically and emotionally abused Sylvia their entire marriage. She was young 15 and grew up with no mother, no one to teach her anything or protect her.

Tom made sure to keep Sylvia from having a life of her own, never did she have nice clothes, or nice furniture, she was abused all the time, with alcohol, drugs and Tom’s fist. He made sure to keep her down, she even lost her job as a bus driver because of Tom. Their son Louie died first of Aids, then Tommy Jr. of Drug and Alcohol abuse, then Chris. The only reason Michael is still alive is because he hates Tom Sr. as his father. Tom and Michael have always had an estranged relationship, so Michael made it a point to stay away.

DOMESTIC VIOLENCE IN RELATIONSHIPS:
I used to travel on the Amtrak Train and an older woman shared with me how her ex-husband bashed her head several times into a wall. She was on the street and homeless, but okay. At least she wasn’t getting her head bashed anymore. A friend from high school used to date guys much older than her (which he could have gone to jail for). He was very abusive and always threatening her with sex. She had three abortions by time she was 18.

My friend Angie from college once went out with friends only to find a guy she knew hiding in her bushes, waiting for her. He jumped out and smacked her across the face because he was jealous. Michelle and Lisa (not related) were both raped numerous times by their biological brothers. Michelle hated her father for allowing the brother to return home after he was released from prison.

Every woman and some males I have know have been abused physically and sexually, including myself, by family members and people they trusted. We live an Abusive Society and the white race has infected us with this disease of abuse, rape and murder. Law Enforcement is abusive, the Military is abusive. Family members treating dark skin children abusively compared to white skin children. Men of violence, mothers killing their children. Politicians murdering humans globally. Creating war killing people only to steal land and oil. Nothing justifies MURDER!!!

SEXUAL ABUSE AND VIOLENCE IN AMERICA:

This topic is one EVERYBODY pretends doesn’t exist. Law Enforcement REFUSES to arrest people in the MOVIE INDUSTRY and WHITE HOUSE. These two areas are the MOST GUILTY of SEX TRAFFICKING, PROSTITUTION AND MURDER!!!!!!! Where does all this abuse stem from? ELITES, people in power who are the worst kind of EVIL. They commit war, murdering people for land and oil, using RAPE as a WAR TACTIC. This is what occurred in most of our back yard countries, now its called the UNITED FRUIT COMPANY. Read and learn the TRUTH of the CIVIL the WAR. MURDER IS NOT a REASON TO BE GREEDY!!!

The WHITE MAN IS A DANGEROUS PREDATOR, who needs to be eliminated!!!  White men are NOTORIOUS for MOLESTING and RAPING THEIR BIOLOGICAL children. Millions of cases have gone unreported with INCEST and RAPE in families, most are WHITE people, and this trickles down infecting the rest of us.

WHITE WOMEN are predators and CHILD MOLESTERS and more likely to kill their children. Read about Here.  WHITE people are the biggest ABUSERS, child MOLESTERS, RAPEST, WAR CRIMINALS, SOCIO PATHS AND MURDERERS. Yet people of color are arrested and accused for their crimes. We are INFECTED by their POISON and DISEASE OF ABUSE and they are LESS LIKELY TO BE INCARCERATED. THE MEDIA LIES so much especially when its IGNORANT WHITE TRASH like RYAN O’NEIL, drug addict and child molester. Ryan is to BLAME ruining his sons life, and Farrah Fawcett.