Defining the “Committee of 300”

Destroying the Human Race is the Committee of 300, also known as The Olympians. They are a group alleged to have been founded by the British aristocracy in 1727. Proponents of the theory alleging the Committee’s existence believe it to be an international council that organizes politics, commerce, banking, media, and the military for centralized global efforts.

The Origins of the “Committee of 300” in my opinion is organized crime.
This is not an alleged group of people, they do exist, they have for centuries. Throughout many organizations within politics, commerce, banking, media and military. However, I wouldn’t consider them to be centralized global efforts. It’s more like global destruction and mass murdering of people because the so-called “Olympians” believe in their evil minds they are above the rest of us. They are just evil and greedy, with no real purpose in life other than destroying the human race and the land God has so graciously provided to all humans.

So the objective of this committee is to destroy the entire human race. Once they do that is when the “world will end”, which approximately is in 320 years from now. It’s spoken of in the Bible and then God will wait until all of the Olympians come together to meet in their secret place, he will then destroy all, in one shot.  Just as he did with the Egyptians and King Solomon and all those who betrayed him.

It’s my belief that this life and world belongs only to God, Angels and Demons all those we can not see, but sense.  It’s man privilege to walk and flourish the earth. However considering he has only destroyed it just like so many people of ancient times before him it’s in process of ending. And because of this destroying the human race will have been accomplished. 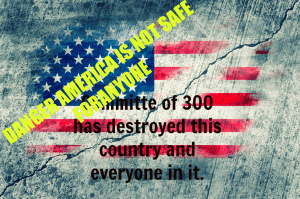 The 21 Goals to Destroy the Human Race from the Olympians.

3). Force people out of their jobs, labor overseas.

4). Weaken the moral fiber of the nation to demoralize workers by resorting to drugs and alcohol creating a larger homeless population.

5) Legalize drugs and pornography, import heroin and cocaine on a massive scale depopulating society while making money doing it.

6) Keep people dependent on prescription drugs make sure no major cures are  ever created.

8) Suppression of all scientific development except for those deemed beneficial by Committee 300.

9) A) limited wars in the advanced countries, B) by means of starvation and diseases in the Third World countries, the death of three billion people by the year 2050, people they call “useless eaters”. The Committee of 300 (Illuminati) commissioned Cyrus Vance to write a paper on this subject of how to bring about such genocide. The paper was produced under the title ” Global 2000 Report” and was accepted and approved for action by former President James Earl Carter, and Edwin Muskie, then Secretary of States, for and on behalf of the US Government. Under the terms of the Global 2000 Report, the population of the US is to be reduced by 100 million by the year of 2050.

10) Create one crisis after another which keeps the population in a state of fear and anxiety.

11) Convince Christians they’re doing good donate large amounts of money and it all goes to 300.

12) Organize a world wide terrorists apparatus encourage the spread of terror and create more serial murders, like they did with “Son of Sam”. and “Ted Bundy”.

13) Cause a collapse of the worlds economics and engender total political chaos (which has occurred).

14) To press for the spread of religious cults such as the Moslem Brotherhood, Moslem Fundamentalism, the Sikhs, and to carry out mind control experiments of the Jim Jones and “Son of Sam” type. It is worth noting that the late Khomeini was a creation of British Military Intelligence Div. 6, MI6. This detailed work spelled out the step-by-step process which the US Government implemented to put Khomeini in power.

15) Take control of all foreign and domestic policies of the United States.

16) Make abortion legal and encourage it, 45 million abortions occur a year. This is a woman’s decision, not a man’s or a law telling women what to do. Yet because of this, it has destroyed human’s lives.

17) Promote rock music and create a whole new generation of drug addicts on a massive scale to distract people.

18) To give the fullest support to supranational institutions such as the United Nations, the International Monetary Fund (IMF), the Bank of International Settlements, the World Court and, as far as possible, make local institutions less effective, by gradually phasing them out or bringing them under the mantle of the UN.

19) To penetrate and subvert all governments, and work from within them to destroy the sovereign integrity of the nations represented by them.

20) To organize a world-wide terrorist apparatus [Al-Qaeda, ISIS, ISIL, etc.] and to negotiate with terrorists whenever terrorist activities take place. It will be recalled that it was Bettino Craxi, who persuaded the Italian and US Governments to negotiate with the Red Brigades kidnapers of Prime Minister Moro and General Dozier. As an aside, Dozier was placed under strict orders not to talk what happened to him. Should he ever break that silence, he will no doubt be made “a horrible example of”, in the manner in which Henry Kissinger dealt with Aldo Moro, Ali Bhutto and General Zia ul Haq.

21) To take control of education in America with the intent and purpose of utterly and completely destroying it. This has occurred thanks to Bill Gates.

No one is safe in America and I mean no one.