Deception with American Currency, did you ever think paper currency would disappear?  Isn’t it bad enough the human brain has been programmed to believing paper currency is real? It’s not, no one really stops to think about it, it’s just paper and ink. A concept, an idea to control the human race. A concept everyday consumers came to depend on. Depend on to buy goods and services globally. Now it’s being taken from us forever. The same way our FREEDOM was taken from us without permission or knowledge with the concept of the “Birth Certificate”.

Lying to the Public

In retail stores everywhere I go a sign is placed by the register “to encourage the public to use their DEBIT CARD”.  There is a SHORTAGE OF CASH. Yeah, right, sure there is.  It’s more brainwashing while wearing these fucking masks to keep us believing the virus is so DANGEROUS AND SPREADING! The reason for all of this is to condition our minds to do without paper currency.  Elites gently and slowly brain wash our minds TO CREATE CHANGE to control the MASSES and keeps all of us in greater POVERTY!!! 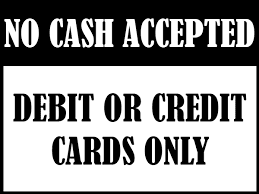 THE INTENTION IS TO TAKE AWAY PAPER CURRENCY, IT’S DECEPTION!!! AS A CONSUMER WE NO LONGER HAVE BUYING POWER, BUT FOOD AND SHELTER WILL BE OUR BIGGEST PROBLEM JUST AS IT IS RIGHT NOW!!!!!!

You can NOT TRUST BANKS! If your identity is stolen and your bank finds out, they will immediately close your account and NEVER give you, your money. They view it as their money first! I personally knew someone this happened to. He was a CPA and had good credit. He had to hire an attorney and lost all his money to the bank. They didn’t care he was hi-jacked, it’s their interests that matter NOT YOURS!!!! as a Consumer or Taxpayer. We The People Get Fucked All the time.

WHY? WE ARE SLAVES IN THEIR SYSTEM THE ELITES AND CORPORATIONS CREATED.  WE ARE HERE TO SERVE ONLY THEM AND THEY’RE WAY OF LIFE. FREEDOM IS AN ILLUSION, IT DOESN’T EXIST EITHER. UNDERSTAND?

Keep most of your money out of the account you created. If for any reason those banks close or only allow you to take out a small amount at a time. You will be screwed!! Venezuela is an example to that.

Banks are corrupt they created this system. The Federal Reserve controls all wealth in the world, bankers too. They don’t care, if they did, why do banks own homes that people have lost? Everyday people are losing their homes, their land, there are no JOBS in this country. Manufactures have left this country, taxes are to high. Tariffs are hurting people in business.

If a person finances a home or buys it in cash, they still have to pay taxes, another scam that has existed since 300AC era.  It’s a scam to keep people wealthy and the rest of us at their mercy. How long is poverty, war and murder going to continue?

As long as it does until our CREATOR takes us out as a human race, blows up the ELITES and torches the world in FIRE just as it says in REVELATIONS!!!

My words have nothing to do with Christianity or Catholicism or any other religion. I don’t believe in religion only “spiritualism” GOD has a wrathful and punishing side, he does and nothing will stop him from taking us out in flames when it’s time.

Remember one thing CORPORATIONS will NEVER stop doing business for anyone, they are NOT regulated by Governments. COMMITTEE OF 300 do BUSINESS TOGETHER, they will never change for the people or human race. If history has told us anything, it’s told us and shown us every group of people are eventually destroyed. Rewriting history are lies to cover the truth of human corruption.