Dysfunctional families are very common in America, but betrayal is not so easily forgiven.  Frances Cosio Karalles was the Goddaughter to my parents until she betrayed them with vicious lies and imposing her personal problem on our family.  Frances has had her share of drug and emotional problems, but always found her self with the wrong men, especially this last time, he caused her from losing her home with no where to go. This is why she came barging in on my parents.

If her parents Hector and Marsha knew of her fucked up behavior and how she betrayed and disrespected my parents it would have been sever punishment for her.  Frances is from La Puente Ca, she was born and raised, still living in Los Angeles. Frances works for Foothill transit Bus Lines. 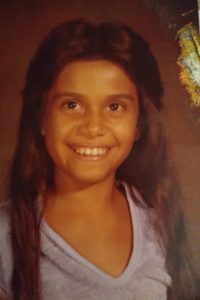 When she was first hired, she lost her home and then quickly imposed herself at my parents home with no place to go. Both her parents had already died, so she couldn’t go home. And she wouldn’t go to any of her sisters house. The reason she was homeless was because she allowed her sleazy boyfriend to live in her home and free-load, so her housing voucher was rejected and she lost everything. Some men are not worth investing in.

Frances caused nothing but problems for everyone and her sister Sophia Cosio (correctional officer at Brawley Facility) was a bigger problem! It all began with Frances imposing her self to stay at my parents home. My parents didn’t want her there at all but being to nice they told her she could stay a few days and that was it. Well it turned out to be several months and she also expected us to care for her son while she was at work because he needed to attend school and he was only 5 years old at the time. I was busy working and my parents were to old to be babysitting her illegitimate son Prince (what a name for a kid). 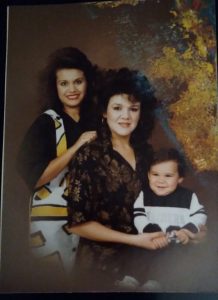 My parents had told her she needed to leave this extended stay was appearing like permanent and they weren’t going to have it. Keep in mind she wasn’t helping out in anyway or paying rent, she was using my moms room and eating their food. So basically they were supporting her, which is not cool and something no one should be bothered with. Frances responsibilities were not my parents responsibilities. It’s no ones fault Frances made poor decisions in her life. This is how she re payed her gratitude. As my mother told her to leave, before this she sneaked in her daughter in the house without anyone noticing. She was hiding her in the bedroom. At one point she ran to the bathroom and a relative noticed.

When it was mentioned to my parents is when my mother told her to get out!!! She didn’t appreciate the deception and the lies and being inconvenienced any longer. So Frances starts lying making up accusations against my father who was disabled and had medical problems at the time that he made in appropriate behavior towards her. Frances is a lying fucking cunt, my father could barely walk and he is not that kind of human being.

This CUNT deserved an ass beating and hard.

Frances just didn’t like my parents telling her to leave! They were fed up with her bullshit imposing on the entire family and hiding her daughter in the room never telling anyone and expect us to care for her son taking him to school and watching him. HEY, bitch your kid and life is not everyone else’s responsibility!!!  I’m sure if your mom Marsha knew of your fucked behavior and lies she would have beaten your ass!! YOUR A CUNT FRANCES AND SO IS SOPHIA.

At this point she starts calling her sister Sophia Cosio talking all kinds of shit so she will side up with her and ignorant Sophia believes her. Actually she had to be reminded of the time Frances did the same malicious behavior once on her sister Sophia. Frances has other sisters Cherry and Sonia she could have asked them for help, but since they refuse to do so, I can see why?

Sophia starts harassing and arguing with my parents shooting her mouth off thinking she is smart. Then she later starts playing sick mind fucking games because she is a correctional officer. Sophia’s fucked up behavior is now pouring out all over two senior citizens. (Adult Abuse) Sophia Cosio is an abusive cunt because of her dysfunctional family shit and her fucked up sister Frances. Let me briefly describe Sophia’s up bringing.

Her parents were good people they both worked hard, but discipline was not an attribute in the family when it was needed. The two older girls (Sherry and Sonia) got out of the house fast. Billy Cosio the only boy turned out to be a monster in and out of incarceration since the age of 10.

Billy was horrible, he was a part of the Mexican Mafia (so he said), but he is dangerous. He nearly killed his niece and got 12 years for that, so he might be out now.  He robbed his mom before she died and kept her in fear when she was alive. He was always a threat and the cause of his father Hector’s heart attack. Serious drug abuse and chaos in the family.

At some point Sophia ended up living at McLaren Hall a group home until she was released and her excuse for being a corrupt Correctional Officer in Brawley where she lives is because of Billy. No, I would say that is all BULLSHIT...Sophia is a CO so she can convince the world she is the good egg in a family of low morals.  She is only trying to convince herself it has nothing to do with her brother, they have no relationship anyway.

Sophia Cosio should spend time in prison herself for being a CUNT  corrupt and a dishonest person. She continued to harass my parents and my mother was very upset. I advised her to report her to her supervisors. She at some point lies apologizing only to make an excuse to come over to my parents house and bring her scum bag piece of shit of a husband and illegitimate brat. 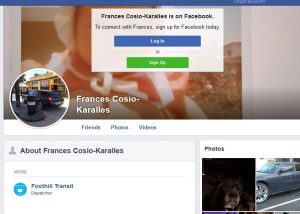 Her husband is the biggest douche bag, insecure piece of shit I have met. He was very disrespectful the entire time. Obviously that cunt is filling in the holes of the bullshit she feels is necessary. Its none of her husbands fucking business. All I have to say is next time SOPHIA don’t admit to telling me of how you abuse inmates at the facility. Its illegal not to allow people to shower and stay clean especially being locked up. I look forward to both of you bitches drowning in shit. Let me send a copy of this out to your supervisors so they can know what a piece of shit you really are Sophie the bitch.

Oh Sophia doesn’t have much of a life, she admitted how she goes through everyone’s back grounds illegally via internet!!  They on you Bitch!!! They on You!!!!