Blanca Vasquez of Riverside is an ungrateful skank who uses people to get what she needs in life. Five years ago I came to find out I had a grandson under circumstances that were not, well let’s just say as stable as they should have been. Yet I did what I could to help with the situation and this is what I received in return from Blanca Vasquez who was living in the city of Lahabra at the time near Harbor, where her mother still lives, but now she resides in Riverside. Let me explain the kind of family Blanca comes from, which is not the best, most of these people have been incarcerated, deported, adulterers and child abusers.

I briefly had an encounter with Blanca’s mother who at the time was struggling, which is understandable but she shouldn’t have been, this person has eight fucken kids most are boys, and grown who did nothing to help their mother. She bounced around because her husband (Blanca’s father) was deported back to Mexico for his own criminal activity (he will not return) law enforcement decided to make an example of him.  However, she has Sancho on the side to help support the family and eventually he helped her get an apartment, yet she is a woman of GOD, but spends her Xmas with the boyfriend, instead of her kids. Yet my son is a problem?

Once I went by where they were temporarily staying and she had somethings to say to me, at the time she was playing on her phone. I had no idea what she was doing, but I come to find out she is contacting her husband in Mexico on the cell. So now I have this strange man who doesn’t bother introducing himself and thinks he has right to tell me shit, oh yeah and where are you?  Aren’t you the pot calling the kettle BLACK!!! No one ever made sense because their thoughts were scattered, so I really had no idea what was going on, I only knew she didn’t want Blanca to date my son, well no one was forcing her. Blanca has her own record.

Now this is a man who has no responsibility to take care of his own fucken family and yet his own sons are criminals (Andre was stabbed in front of the house, one of the brothers) and not worth a shit but mine is the problem. With eight kids, sons are criminals and the two younger kids are still going to elementary school at the time.

If Blanca’s father is so concerned about his daughter, maybe he should have been a fucken man and taken care of his family instead of running a muck and being a criminal and deported.  These people are the perfect of example of why Mexican families are being treated like shit and exploited. Blanca is NO ANGEL, this Harlot had no problem getting pregnant three times, and one of those times I took her to have an abortion.

I realize she is young and ignorant, but her family is a serious endangerment to my grandson.  Four years ago on New Years Eve Blanca was at her mothers alone, one of the brothers who has been incarcerated many times busts in the door and starts arguing with Blanca, he pulls a knife on my grandson and threatens to kill the baby and Blanca, she told me this on the phone. She called the police and he fled, he couldn’t be found after that.

(During this time I was taking Blanca to Fullerton College and watching the baby).  I didn’t mind trying to do what I could, but I can’t control other people’s actions. During this time her family was being critical of her going to school but they had no problem taking her financial aid money for frivolous reasons which is supposed to pay for school.

The Ghetto Rat in the picture you see here is the Girlfriend of the older Brother related to Blanca, this CUNT deliberately burned my grandson with HOT WATER, claiming it was an accident. Bitch there are NO ACCIDENTS IN LIFE! She also has a bad habit of breast feeding her baby while driving a car. (CHILD ENDANGERMENT, CHILD NEGLECT, KIDS NEED TO BE REMOVED).  Someone call Child Protective Services!!!!  Blanca thinks she is smart NOT allowing us to spend time with AJ, well, he won’t be little forever, in 12 more years he is legal age and I will be the one to tell him the truth about his shit family and what his mother did.

During the time I was caring for AJ, Blanca asked me to watch him full time so she could graduate from school, I said okay I didn’t mind and I was driving her daily to school and picking her up. Blanca told me she couldn’t rely on her family and her sister was having another kid she couldn’t afford (why these girls don’t take care of themselves, nothing good will come from your life having a bunch of kids).  I can see why everyone is dysfunctional and the mother is working a crap job, her boyfriend will never marry her, but he pays for her ass. Oh I am sorry helps her out, my bad?

So what happens next? I’m still unclear, the next thing I know Blanca stabs me in the back and starts talking shit how she hates Adrian and he will NEVER see his child. I can only assume at this point it has to be her fucked up parents, her religious mother influencing the situation (she plays the victim well).  Blanca’s mother has no education, she can barely speak English and works a minimum wage job. She can’t support all her fucken kids by herself, her son’s are useless and has no man to rely on other than Sancho on the side, which is limited. He will never marry her, especially if she is still married to someone else.

Let me not forget, Blanca’s father has another family in Mexico, another wife and kids. How convenient, but my son is the problem?  Does anyone bother to look at themselves in the mirror? Seriously.  Now Blanca moved to her mother’s boyfriends house in Riverside, shacked up 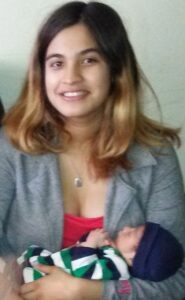 with the first guy to come around. This way she doesn’t have to work and can have some guy support her. She never finished school and has no job, oh and she is pregnant again for the third time.  A couple of years ago out of the blue she sends a text messages (instead of calling me) asking if I could watch AJ and take him trick or treating. I wanted to very much, but she lied when I asked her where are you going? First she act stupid, as if not understanding the question, and then she lied and said, to work. Yeah, okay she hasn’t had a job for at least a couple of years. This is when I began to find out her situation with some other dude.

I honestly don’t care, if she chooses to be a cunt that’s on her, but considering how hard I tried being there for her, only to stab me in the back and taking her to school because her family didn’t care. She was ungrateful little bitch and kept my grandson away and yet blames me for not calling after she told me to not to come around because of family issues, really?  Yet only calls when she wants something. Blanca Vasquez is a liar, and a two face shit. All this time she was still Sara Perales friend, as she lied about that too. Both these skanks are one in the same and will amount to nothing!!! Especially Sara.