Biden Lifts Abortion Referral Ban. The Biden administration on Monday reversed a ban on abortion referrals by family planning clinics, lifting a Trump-era restriction as political and legal battles over abortion grow sharper from Texas to the U.S. Supreme Court. Biden is the worst president next to Carter from years ago, that has sat in the White House. He’s weak and too old. Frankly this country doesn’t need a president or a false government, because all it does, is ruin the lives of the collective, brain washing people and lying to the communities, stealing money from consumers so we can pay for the rich to live well.

The Department of Health and Human Services said its new regulation will restore the federal family planning program to the way it ran under the Obama administration, when clinics were able to refer women seeking abortions to a provider. I don’t know how these assholes can have the right to tell any female what she can do with her own body. It’s all about keeping slavery active, if young women and older women don’t have kids, then the population dies and there are no slaves in society to support the white man. God forbid that moron is poor.

Groups representing the clinics said they hope the Biden administration action will lead hundreds of service providers that left in protest over Trump’s policies to return, helping to stabilize a longstanding program that has been shaken by the coronavirus pandemic on top of ideological battles. Corona virus is an excuse everyone is using, it has nothing to do with any of this. It’s the white man trying to control women and their reproductive organs to keep slavery alive! There are hundreds of women today who are very young and pregnant on the street with no where to go. This is creating a larger problem.

Known as Title X, the taxpayer-funded program makes available more than $250 million a year to clinics to provide birth control and basic health care services mainly to low-income women. Under former President Donald Trump, clinics were barred from referring patients for abortions, prompting a mass exit by service providers affiliated with Planned Parenthood, as well as several states and other independent organizations. This bullshit continues, then backyard abortions’ will start. 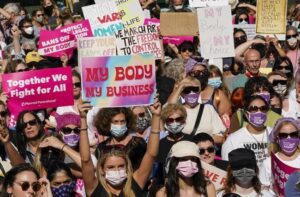 Women’s groups labeled the Trump policy a “gag rule,” and medical organizations called it a violation of the clinician-patient relationship. But religious and social conservatives praised the policy for imposing a strict separation between family planning services and abortion. Under federal law, clinics could not use federal money to pay for abortions.  Is that so, well you mother fuckers in the white don’t have a problem stealing money everyday from the taxes the consumers are forced to pay, which is illegal, since most people are not self employed.  God only knows where all that money really goes while it accumulates interest in the world bank.  “Oh that’s right aero space shit and the fucken military, because of white mans greed!

FUCK, those ignorant “religious groups” and FUCK, those stupid conservative jack-wads, they have no right supporting these ignorant restrictions, never knowing these women personally and if they did, they still have no right to say anything.  I was 22 years old and had three kids I never wanted, I raised them alone, it ruined my life, my dreams and opportunities I could have had. Now being old, over 50 (women are less valued) it does matter, times have changed, and still struggle to support myself, as I will no longer allow myself to be a slave in this shit system. All that exists are shit jobs that can’t pay the rent, or an executive job that only white people are allowed to have, considering the numerous contradictions of segregation and discrimination plays a factor.

The resentment over the years, all because my mother did NOT support abortion could have saved me heart ache. I was naïve with no voice of my own, but of course that has changed. Now over 50 I have struggled all of my life and people expect me to happy with a fucken minimum wage job the rest of my life?  FUCK NO!!!! I now have some health issues. Having a child is the biggest burden and people are so stupid, they just keep having kids in this fucked up society. People never practice safe sex. You don’t know what the future will bring, couples don’t stay together and why raise a child alone? A kid needs both parents if their mature enough, which couples usually are not. “I’M GOING TO SAY THIS TO ALL YOUNG WOMEN, AND MALES, TAKE THE ROAD LESS TRAVELED, IT’S NOT WORTH SACRIFICING YOUR LIFE!!!  Witchcraft will help you to abort pregnancy.

And for all those stupid females (white women) and those who not white, thinking marrying a man with money will make the difference, no it won’t. Every human goes through mid-life change and every woman goes through menopause. Neither is easy and it will clash when raising kids, this is one reason couples fight and family problem develop, because most people never understand these changes that occur, they are biological, it happens to everybody. It brings many emotions and conflicts and other problems to the mix and you end up with a big mess trying to raise your kids.

As for females you should never depend on a man, he could die, or leave you, there is no guarantee.  Take the road less traveled, think about yourself as a young woman, live your dreams and be ambitious, you will, understand who you are. It does take a life time, work hard and figure it all out what you want to do with your life, that is a challenge in itself. Having a kids a HUGE RESPONSABILITY. It might be lonely, but if you need to be successful on your own, having kids will only make life harder.

In 2018, the family planning clinics served about 3.9 million clients, but HHS estimates that number fell by nearly 40% after the Trump policy. The upheaval may have led to more than 180,000 unintended pregnancies, the agency said. Who the hell do these stupid people think they are telling women what to do to begin with?

Telling a woman “No to Abortion”, it’s not your fucken body, stop TELLING WOMEN WHAT TO DO!!!!! YOU STUPID CORRUPT POLITICIANS!!!! You DO NOT OWN US, WE ARE NOT YOUR PROPERTY!!!! STAY OUT OF WOMENS REPRODUCTIVE BUISNESS!!!!

YOU MEN WOULDN’T EXIST IF IT WASN’T FOR A WOMAN GIVING BIRTH TO YOU!

Tags: #Fuck the Church and Religious Bullshit, #Fuck the Conservatism, #Practice Safe Sex, #Stop having kids, #Support Abortion100 %, #Witchcraft can abort a pregnancy, #Yes to Abortion
This website or its third-party tools process personal data.In case of sale of your personal information, you may opt out by using the link Do not sell my personal information.
×
Privacy & Cookies Policy